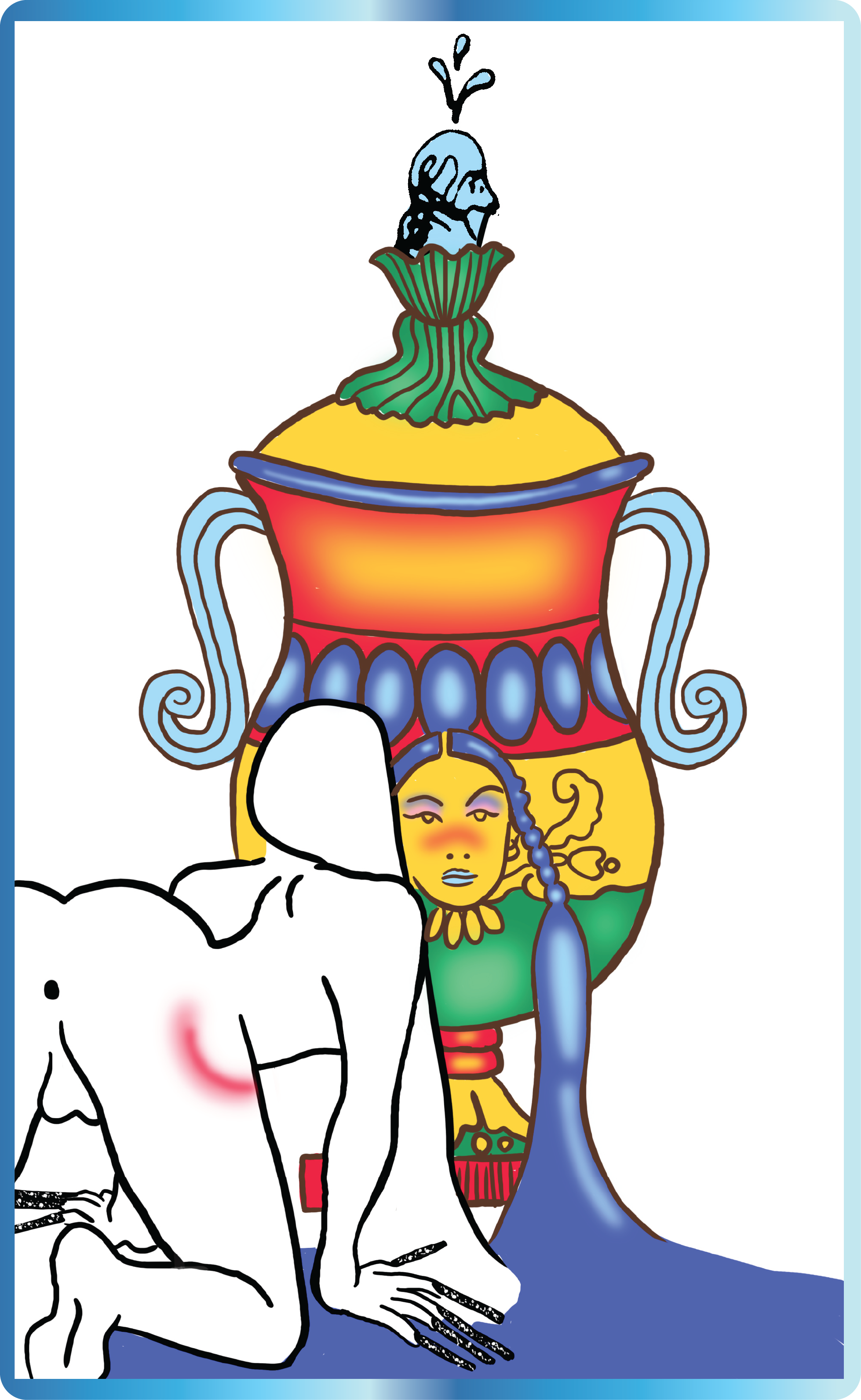 Ace of Cups. Upwards: it represents home, life and affection. It can also indicate workplace. It is a very positive card, good feelings, emotional stability, marriage, positive events. Reverse: problems within the family, difficult relationship between family members, as well as possible problems within the domestic spaces. A difficult pregnancy, sadness. 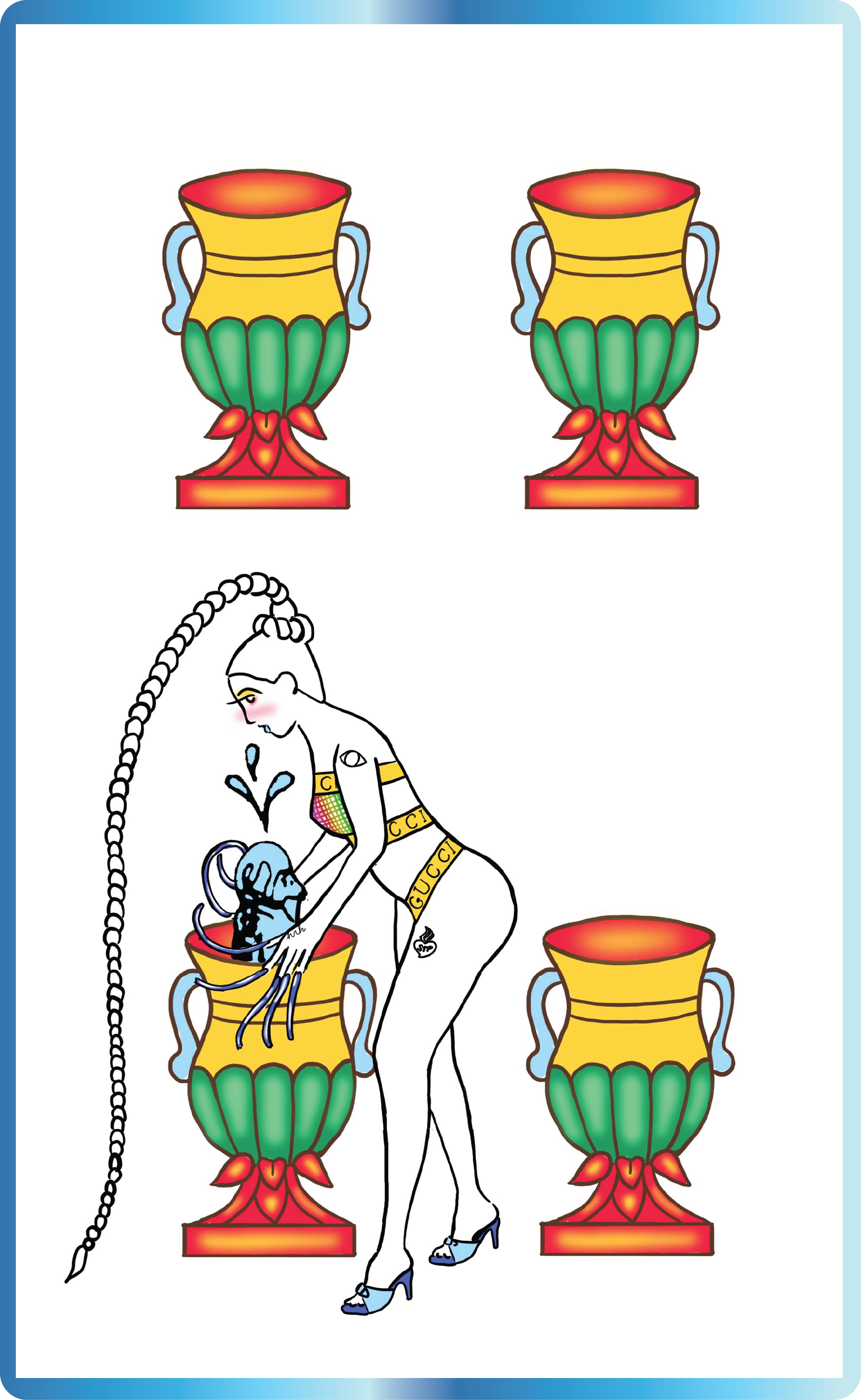 Four of Cups. Upwards: harmony and balance in living relationships, both emotional and family. Situations that find a new stability. This card indicates the possibility of an important meeting, sometimes also to clarify suspended situations. Reverse: problems that arise (or continue to occur) due to lack of clarification. Boredom and routine lead to a situation of apathy. Closing towards everything and everyone. 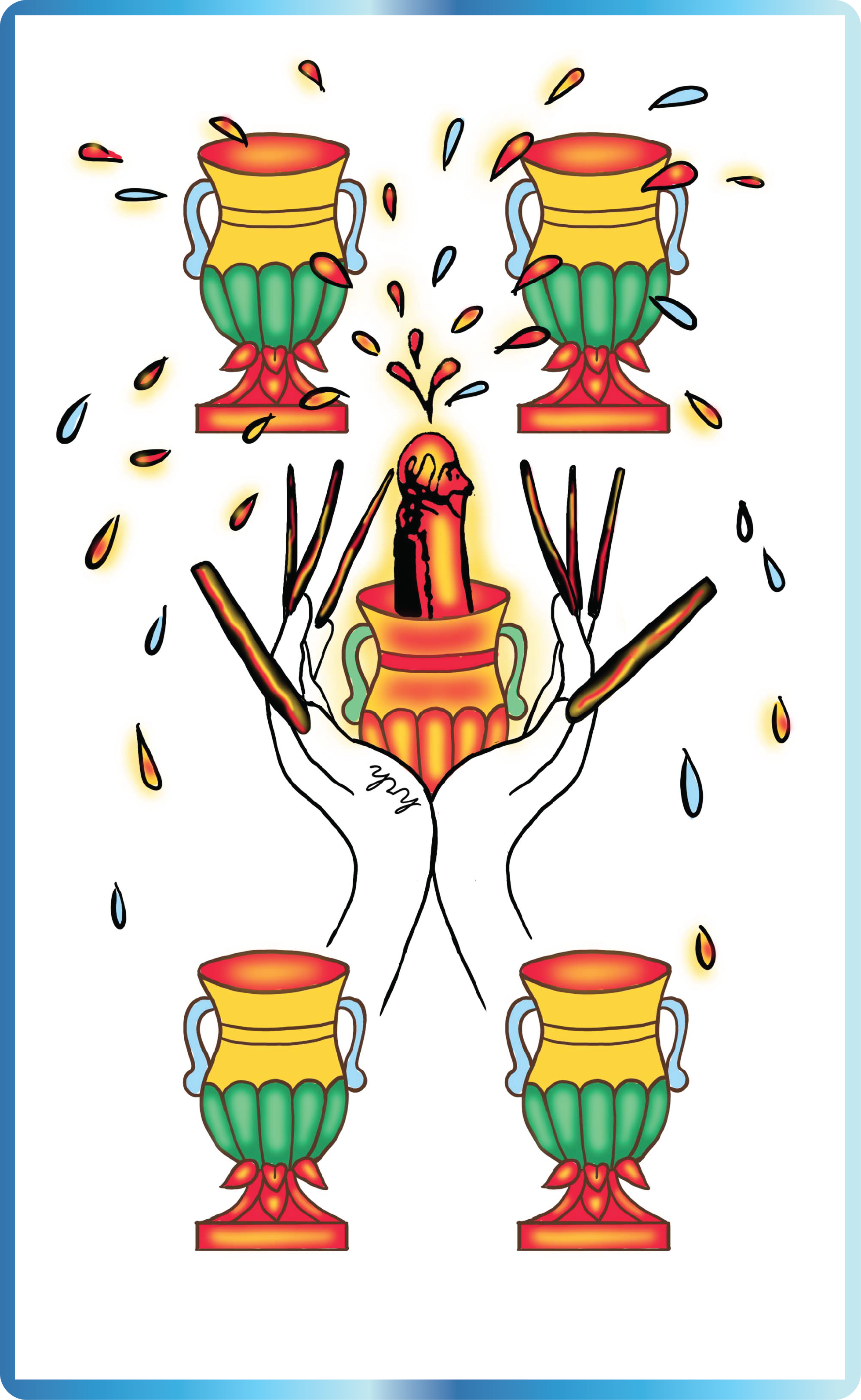 Five of Cups. Upwards:  it is the card that heralds the arrival of a novelty that will change the situation. The other cards will make it clear whether this change is positive or not. New paths are being followed, which at the moment may be difficult, but will lead to satisfactory results. Possible heredity. Reverse: in this position, the five of cups speaks of a return. Whether it is positive or not, whether it lasts or not, it will be indicated by the nearby cards. It could indicate a change towards past situations, a return to old patterns and behaviours. 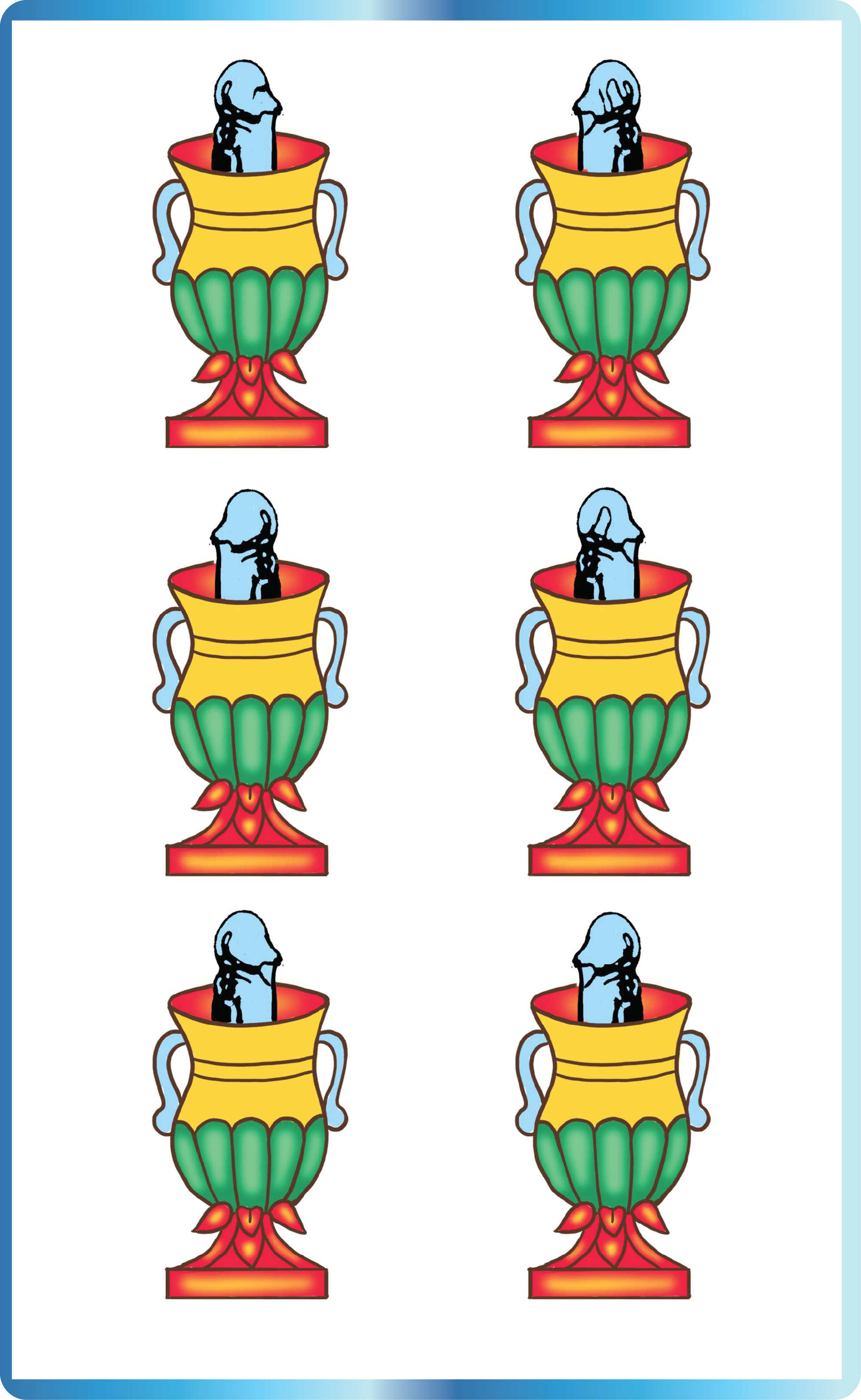 6 of Cups. Upwards: the card of memories and the past. Indicates that something is being relived that no longer exists. It may suggest not to escape from a situation that continues to repeat itself, that the time has come to face it. In some cases, it can also indicate treason, especially with people from the past. Reverse: indicates the future time, the trust in what we will meet. Bring attention to the developments we will face. 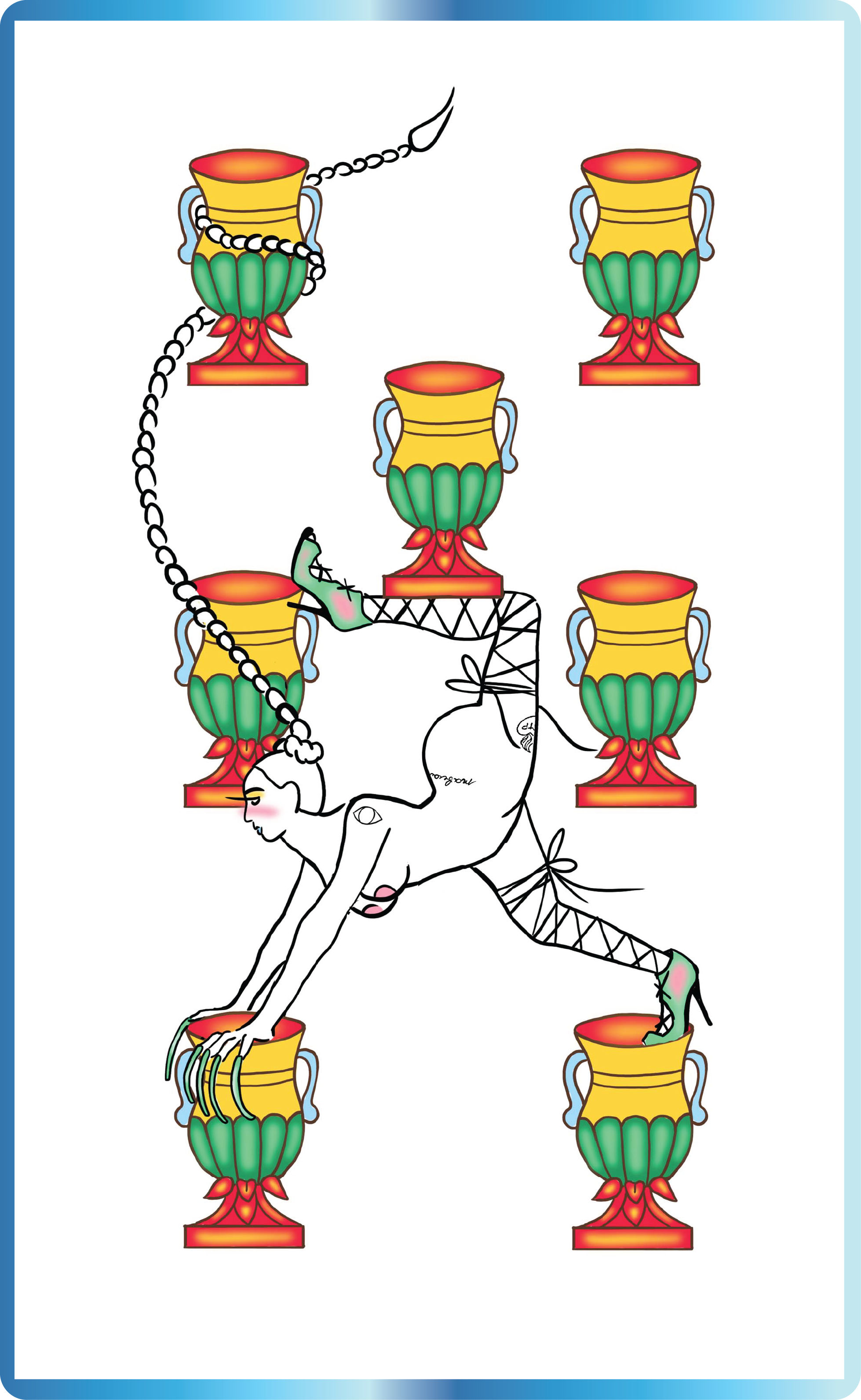 Seven of Cups. Straight: very positive card, speaks of periods of happiness. Satisfying and fully lived relationships, parties and friends, meeting with people who will help us. Reverse: daydreams, utopia. illusion. There are few dry feelings, either from us or from the partner. We are under the illusion that everything is going well, or we want impossible things.

“I can still see conflict under the lid of Pandora’s box. Yet, the gushing and pulsating feminine fluid is appealing to me: una piccola morte. I live of a desire that goes beyond the flesh, a desire to transform into a marine breeze. To migrate, gradually, like a primitive creature that morphed through time; to slide from Capricorn, the sign I embody – a sea-goat stuck in gravity – into Aquarius. Such as Aeolus, son of Poseidon, I would become air. Like him, baptised in the dense, sacred liquid, I could finally liberate myself from the ground. By changing form, there will be no occurrences, only the flow of time. Acqua e Aria: they unify me; they form a harmonious whirlpool that connects surfaces and depths.” – MILOVAN FARRONATO