With contributions by: Anna Franceschini and SAGG Napoli

On July 27, 2018, a total lunar eclipse will occur: the Moon will pass through the center of the Earth’s shadow, as our theatre-cum-volcano will raise its stage curtains once again in Stromboli. This will be the first celestial phenomenon of such kind since summer 2011, when our festival first appeared on the crystalline black sands of the island.

Curated as per tradition by Milovan Farronato, Total Anastrophes, the eighth edition of Volcano Extravaganza, sees Runa Islam as the Artistic Leader. The core group of participants is composed by Cecilia Bengolea, Alex Cecchetti, Alec Curtis, Patrizio Di Massimo, Haroon Mirza, Lydia Ourahmane, Tobias Putrih and Osman Yousefzada, joined in Stromboli by Malala Andrialavidrazana and Lydia Ourahmane. Last but not least, there will also be new contributions by Anna Franceschini and SAGG Napoli.

The title of this year’s edition, Total Anastrophes, hints at a figure of speech in which words are moved and placed in an unconventional location within the same sentence, reverting the usual order (of things): like a card shuffle, an anastrophe creates an open possibility from something that is pre-existing. Investigating collective and trans-genetic memories through the spectacle of a theatre inside the volcano, and looking at the volcano as a metaphor for states of dormancy and latency, the festival began last February in Dhaka, Bangladesh, on occasion of the Dhaka Art Summit.

Once again, we are collaborating with The Store X Vinyl Factory, which will present ISLAND LIFE – A DANCEHALL PARTY: featuring a live performance by Cecilia Bengolea & Erika (Paris) with special guests from the Black Eagle crew (Jamaica) as well as a dj-set by The Heatwave (London), the night will continue until dawn at our beloved Club Megà.

Runa Islam will explore the new raw montage for a new film within the context of Eye >< Not Eye, a one-night, performative installation held in the Fiorucci Art Trust venue at the roots of the active volcano. There, she will create a soul-mirroring environment that will also feature the projected imagery of condensed liquids, tearing eyes, a floor drawing and black sands.

Assisted by Hiba Ismail and Giulio Ceruti, Lydia Ourahmane will take over the kitchen of La Lunatica and prepare a light dinner with ingredients foraged directly from the flora of Stromboli, investigating the specificity of the place through a moment of conviviality. Taking the inside out, Ourahmane will also orchestrate a bodily extension of the island, which will be submerged in the nearby waters: a sound work composed in collaboration with Nicolas Jaar, contained in a waterproof vessel marked by a rubber buoy, which our public will be able to swim and listen to, for as long as they can hold their breath for.

Malala Andrialavidrazana has created a geopolitical map, Specie degli animali, inspired by the island and to our previous experience in Bangladesh, which will be welcoming the visitors at La Lunatica during the opening night, on 27 July. The work embeds visual representations in resonance with the themes of the festival, ranging from the correspondence between Milovan Farronato and Runa Islam to mythological creatures and local fish related to the Tyrrhenian Sea, all collaged onto a map of Antananarivo, Andrialavidrazana’s hometown in Madagascar and a 1842 atlas by Italian geographer Francesco Costantino Marmocchi.

Having congenially edited the film footage of our echo-chamber rehearsals that Runa Islam directed in Dhaka, visual artist and film-maker Anna Franceschini—a historic presence in the Trust’s volcanic enterprises—will also return on the island, where she had been a regular during the very first years of Extravaganza. Most likely, she will also direct the documentation of our theatre in Stromboli, which will be edited by Runa Islam, in a reciprocal play of vice versa.

SAGG Napoli, acronym for the ongoing project and practice of young artist Sofia Alice Ginevra Giannì, will physically join us from her native town of Naples to operate her digital presence, casting her signature eye on the festival throughout a series of interventions across both hers and the Fiorucci Art Trust’s Instagram, as well as a the occasional dj-set.

Other than collaborating with Lydia Ourahmane for her Strombolian-inspired dinner, stylist and designer Giulio Ceruti will be in residence with The Neurologist (Francesca del Sorbo) who will be ready to promptly intervene to our rescue, while spreading further energies and inspirations. Moreover, we will benefit from the gracious presence of Paulina Olowska who, accompanied by the troupe of Vogue Poland, will involve the two—as well as several other characters of the island—in a special shoot, recording imagery of the island and moments of our festival.

Marking the very conclusion of the festival, drawing upon their joint experience in researching meditation as a medium and support for creative production, the Trust’s Founder Nicoletta Fiorucci and Matilde Cerruti Quara will be playing the quantum alchemy crystal bowls.

Upon returning on the mainland, Naples-based Residency 80121 and Relais Regina Giovanna in the nearby coastal town of Sorrento, will host Total Anastrophes for a few, final eruptions, in the evening of July 31. While witnessing nightfall through a promenade in nature alongside the pathways of the Relais’ bio-farm, the Trust’s Director Milovan Farronato will be in conversation with some of the participants, sharing with the audience tales from previous days, and creating one last immersive and collective atmosphere of remembrance before the conclusion of this edition.

We also wish to thank SNAV, our technical partner which has offered a 20% discount on the hydrofoil covering the route to Stromboli, accessible through the code snavextra till 20 July.

As always, Volcano Extravaganza is a public festival, all events are free and open to all. 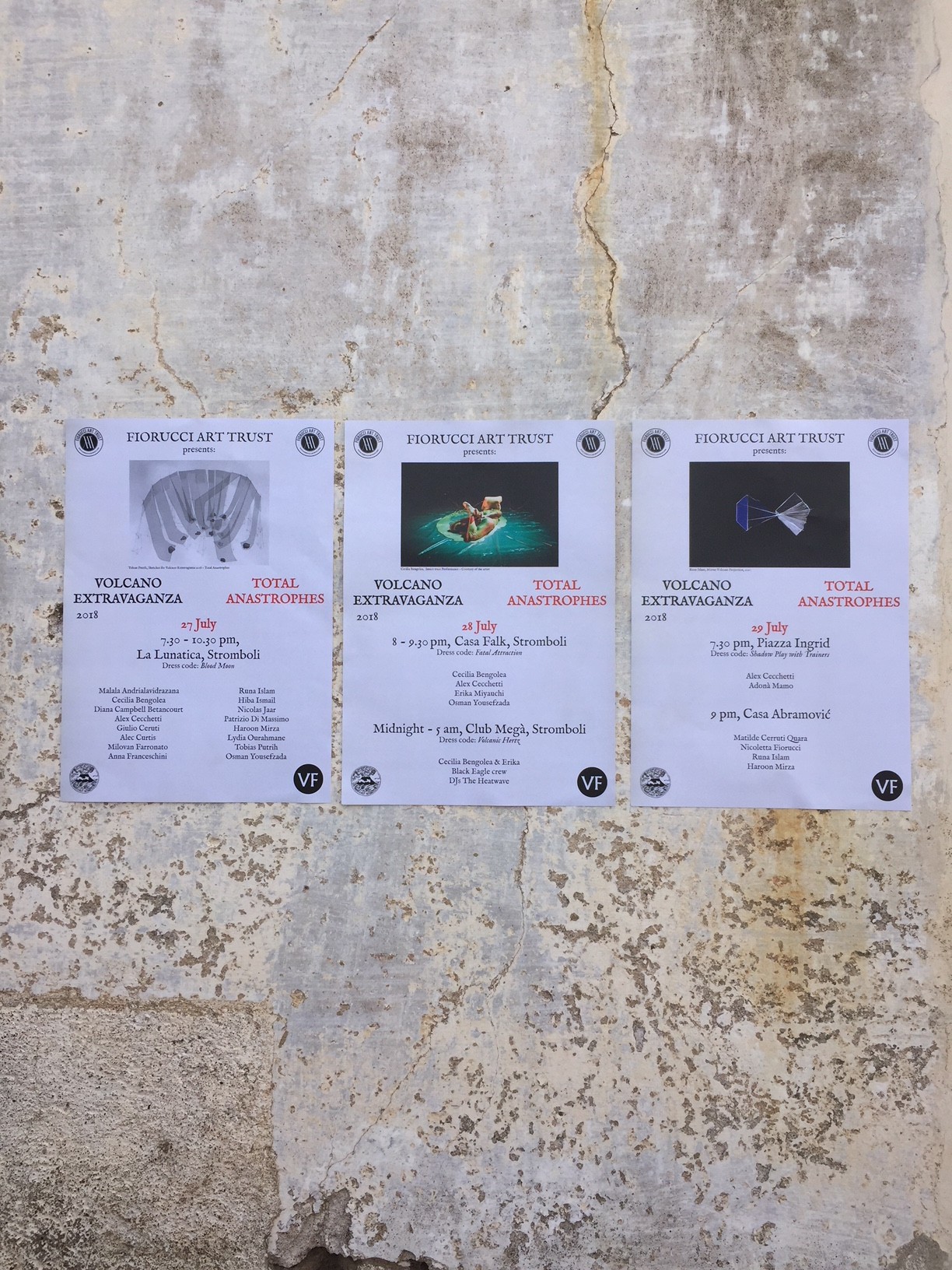 27 July 2018
7:30 – 10:30 pm, La Lunatica, Stromboli
Dress code: Blood Moon
Total Anastrophes will open with an exhibition of new paintings by Patrizio Di Massimo at La Lunatica, depicting some of the Fiorucci Art Trust’s characters engaged in statuesque fights. At the entrance of the venue, welcoming our visitors, a map by Malala Andrialavidrazana bridging the past and the present, Dhaka and Stromboli, other than leitmotifs from the subject matters of the 2018 edition. Outside, on the patio and rocky terrace, Tobias Putrih will display his new screens-structures, made in arundo donax (a diffused reed which has belonged to the Sicilian agricultural tradition for centuries). As the last rays of sun set beneath the line of the horizon, the distorted sonorities of the volcano will arise once again in the theatre: manipulated by Alec Curtis, the vibrant speeches of Milovan Farronato and Diana Campbell Betancourt will ricochet outside, merging with the sound of the waves and the wind. All participants will perform. Alex Cecchetti will present once again his Cetaceans chants with the local choir of Stromboli, while Haroon Mirza will play his sonorities from Volcano Diaries. Once again Putrih’s architectures will function, thanks to appositely positioned drapes of fabric, as moveable screens for a series of projections—which will also include Runa Islam’s film shot in Stromboli, This Much Is Uncertain, and the film footage of our echo-chamber rehearsals that Islam directed in Dhaka, congenially edited by Anna Franceschini. Lydia Ourahmane will offer a light dinner, featuring vegetal elements foraged from the island, prepared with the help of Hiba Ismail and Giulio Ceruti.

At sunset, Casa Falk in the Piscità district will be courteously open to the public by its owner Martin Hatebur. There, while Alex Cecchetti will quench guests with sensual poetry along with amorous and erotic cocktails from his Love Bar, Osman Yousefzada will present a Total Anastrophes—based capsule collection, for which he will create a limited number of garments inspired by plate tectonics theory, matryoshka dolls and the island itself. Instead of a catwalk, the garments will be organically introduced through the designer’s new format of the house party, and will be worn by locally cast models. Co-presented by the Trust with The Store X Vinyl Factory, Cecilia Bengolea will perform a new choreography, evoking the primordial symbol of the serpent with its mutating qualities.

We will meet once again, as per tradition, at local Club Megà, an amphitheatric platform carved in the volcanic rocks for: ISLAND LIFE – A DANCEHALL PARTY presented by The Store X Vinyl Factory. The night will feature once again Cecilia Bengolea, who will perform together with Erika and the Black Eagle crew, involving the audience in a collective masterclass rhythmed by the low frequencies of emotional sounds. Afterwards there will be an especially dedicated DJ-set by The Heatwave. Entrance is free.

Alex Cecchetti, accompanied by soprano Adonà Mamo, will perform Tamam Shud as he leads our way through the cemetery of Stromboli and up to Casa Abramović, for the opening of Eye >< Not Eye, the performative installation by Runa Islam showcased there.

The festival will conclude with a sound bath by Nicoletta Fiorucci and Matilde Cerruti Quara.

… for those arriving in Stromboli on July 26, stylist and designer Giulio Ceruti will prepare a propitiatory welcome dinner, generously hosted in the home of long-time islander Pasquale Sabatino. On that occasion SAGG Napoli will play a dj-set. Further details will be disclosed in due course.