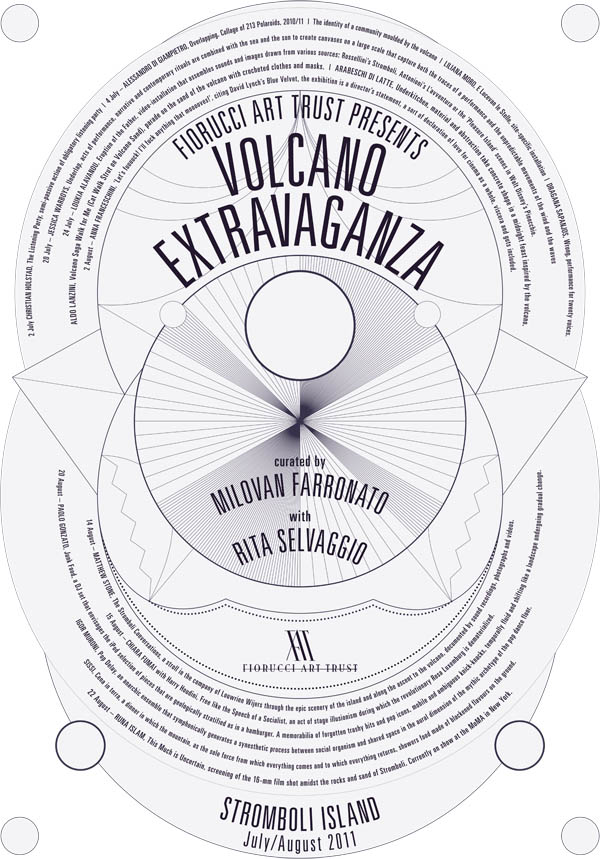 Volcano Extravaganza: a first name and a surname. It’s an open concept produced by the Fiorucci Art Trust that will entail a series of ephemeral and fortuitous events based on improvisation and chance to be staged on the volcanic island of Stromboli.

The intention is to investigate different forms of fusion and overlap, in relationship with the contemporary world. Above all Volcano Extravaganza explores the idea of experimentation and asks the participants to rethink the contents of their work. The hybrid set of personalities involved and the way in which they present their experience will explore, through breaks and discontinuities, a succession of exchanges between different poles of time and place.

DJ-set marathons, sounds and actions, performances and site-specific installations will alternate over the course of this long and endless summer. Screenings, temporary exhibitions and round-table discussions with architects, artists, writers, curators and thinkers will be held in the shadow of an active volcano, following a format that is devoid of structure.

The event will host solo shows by Jessica Warboys and Anna Franceschini, screenings of films inspired by the island made by Runa Islam and Loukia Alavanou; evenings of food design as midnight supper conceived by the Arabeschi di Latte and the tortuous culinary visions of Sissi. Matthew Stone has scheduled The Stromboli Conversations, an unprecedented stroll up to the volcano’s crater in the company of Louwrien Wijers, while Christian Holstad has planned a ‘semi-passive listening party’.

Chiara Fumai will perform a conjuring trick in which a female revolutionary is dematerialized. Liliana Moro has given the title of an aria from Tosca, E Lucevan le Stelle (‘And the Stars Used to Shine’), to her intervention, in which she intends to wave a very personal flag, not as a symbol of national identity but as a way of announcing new possibilities.

Alessandro Di Giampietro has photographed the local inhabitants and then torn apart to form his census, at times grotesque and at times romantic, of the island’s people.

As Alighiero Boetti once said, ‘stra-vaganza is neither nomadism nor wandering, but brightness and a 360-degree horizon. And above all it invests in multiplicity and the unexpected nature of encounters’.