In Autumn 2013, Fiorucci Art Trust presented the first instalment in Lezioni D’Italiano, a series of artist lecture-performances. Curated by Fiorucci Art Trust Director, Milovan Farronato, these evening programmes present Italian artists, or those that address Italian subject matter, once a month at Fiorucci Art Trust’s HQ. Through the years, artists of different generations showed works that explored and expanded the nature of their practice in the uniquely intimate environment of the residential HQ, creating a dynamic platform for participation and engagement.

For the opening performance, Patrizio Di Massimo presented a piece titled Monologue for two. The work is a monologue in the shape of dialogue between the artist and a video that portrays the artist. Di Massimo is on stage physically but hidden behind a curtain; the video is instead realised with Morfo, an iPhone application that creates 3D avatars through processing a simple bi-dimensional portrait picture. In this work, the artist deals with multiple projections of the self, in relation to reality and imagination, to what he could have been and what he is. Monologue for two is an intimate self-portrait, in which the artist invents himself for what he is.

Each lezione features a concurrent food element. Previous food performances were conceived by Italian food design studio Arabeschi di Latte. Responding to a culinary understanding of a lesson as a series of instructions as contained in a cookbook, Arabeschi di Latte reinterprets dishes in collaboration with chef Lucas Dominguez and Emmanuel Di Liddo, inspired by the traditional Italian cookbook.

Nicoletta Fiorucci, founder of Fiorucci Art Trust, says: “Fiorucci Art Trust works with artists from all around the world, but we wanted to do something specifically for artists from Italy or who engage with Italy in their practice. London offers so many opportunities for these artists which perhaps they are unable to find elsewhere, and we wanted to capitalise on this to create something truly exciting for all kinds of audiences.”

For the first episode of Lezioni d’Italiano, concurrently on show was Marc-Camille Chaimowizc’s installation, Cabinet Cocteau. Originally shown at Tate Modern’s A Bigger Splash show last year, the work was updated and transformed in the uniquely residential environment of the Fiorucci Trust HQ, taking over the entire first-floor living room space. A major new installation by Goshka Macuga Death of Marxism, Women of All Lands Unite, was also on display. 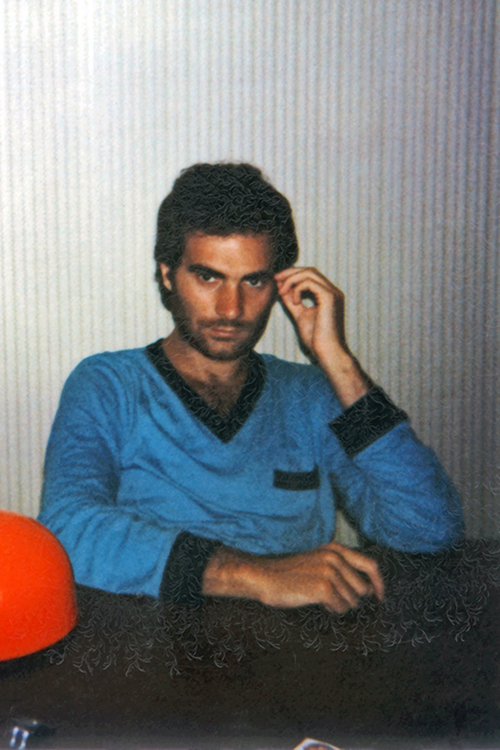 Patrizio Di Massimo (b. Jesi, Italy, 1983) lives and works in London. He graduated from the Academy of Fine Arts of Brera, Milan, and received his MA from the Slade School of Fine Art, London. He is currently exhibiting at Gasworks, London, with the solo show The Lustful Turk. He has participated in residencies at Stipendium Kunstzei- traum, Munich (2012), de Ateliers, Amsterdam (2009-2011), Sommerakademie at Centre Paul Klee, Bern (2010), Fondazione Spinola Banna per l’Arte, Banna di Poirino (2009). His upcoming exhibitions include solo presentations at Artissima, Turin, Kunsthalle Lissabon, Lisbon, Rowing Projects, London. Recent solo exhibitions include Voglio Vivere Così, T293, Rome, The Lustful Turk, Villa Medici, Rome and a performance at the Stedelijk Museum as part of the public program. In 2012 he was selected as a finalist in the Premio Italia 2012, hold at MAXXI, Rome and participated in La Storia che non ho vissuto (testimone indiretto), Castello di Rivoli, Rivoli, Ritual without Myth, Royal College of Art, London. 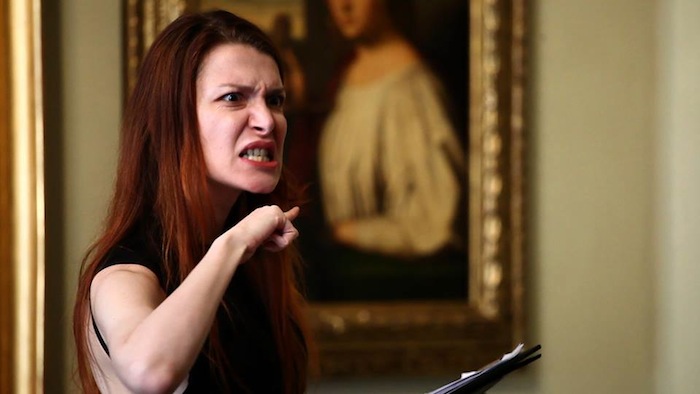 Chiara Fumai, I Did Not Say or Mean ‘Warning’, 2013. Photo by Emiliano Aversa

Chiara Fumai (Rome 1978 – Bari 2017) was an Italian artist known for her performative and multi-media works featuring psychic abilities, anti-spectacle strategies and counterculture icons. She participated in dOCUMENTA(13) with The Moral Exhibition House: creating a space for feminist insurrection disguised as a freak show between Kassel’s Aueparke and the roof of the Fridericianum. She channelled the spirit of an Anonymous Woman in the historical art collection of the Querini Stampalia Foundation in Venice (I Did Not Say or Mean “Warning”, 2013) and created a fictional propaganda of Valerie Solanas’ S.C.U.M. Manifesto mirroring the first political campaign of Silvio Berlusconi (Chiara Fumai reads Valerie Solanas, 2013), with which she received the IX Furla Art Award. On the occasion of Contour 7, The Biennial of Moving Image, she rewrote the story of her live acts into a seance (The Book of Evil Spirits, 2015). In 2017 Chiara Fumai won the XIV Premio New York held by the Italian Ministry of Foreign Affairs and the Italian Ministry of Cultural Heritage. In May 2019 her work was exhibited at the Italian Pavilion on the occasion of the 58th Venice Biennale of Visual Arts.

Always refusing to be victimized, minoritized or diminished as a female artist, Chiara Fumai adopted the vocabulary of threat, offence, revolt, violence, vandalism and boredom to produce uncomfortable situations, collages, environments and actions in open opposition to the dominant discourses of Western patriarchy. Playing an ironical game of true fiction which appropriates the techniques of remixing and channeling, Chiara Fumai’s performative pieces evoke female figures who, with their courage and anger, marked human history just before being excluded: amongst them, bearded lady Annie Jones and Circassian beauty Zalumma Agra, German terrorist Ulrike Meinhof and illiterate medium Eusapia Palladino, philosopher Rosa Luxemburg and feminist writer Carla Lonzi. Her remarkable and peculiar gallery of portraits also included a few male presences like the illusionist Harry Houdini. Not to be forgotten is Nico Fumai, the first of her fictional personas and unique in having a biographical origin. With him, Chiara Fumai not only imagined a new profession for her father but also used her interest for Italo disco as a strategy to interpret a specific historical era as well as bringing together a number of different fields of research. 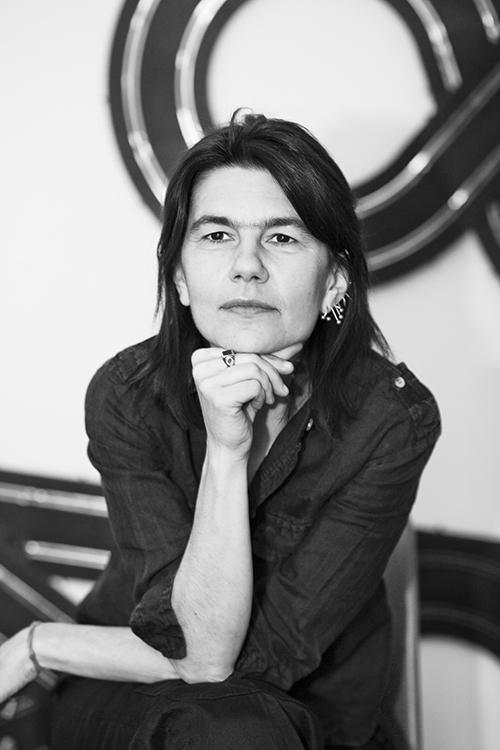 Arabeschi di Latte is an Italian food design studio founded by Francesca Sarti in 2001. Blurring the boundaries be- tween food and design and using food as a tool to com- municate, Arabeschi di Latte has created and exhibited a variety of food-related projects such pop up café, special dinners, performances and workshops around the world. Among the projects realized are pop-up cafe Pastificio, pre- sented for the first time in Tokyo in 2009; interactive instal- lations such as The Archeo Mill for The Future Food House curated by Marije Vogelzang in Rotterdam; special food consultancies for brands including Fendi, Bally, Kenzo, San Pellegrino, Boffi, Discipline Design and galleries such as Phillips De Pury; and fruitful collaborations with Stu- dio Toogood, Design Marketo and Apartamento Magazine. 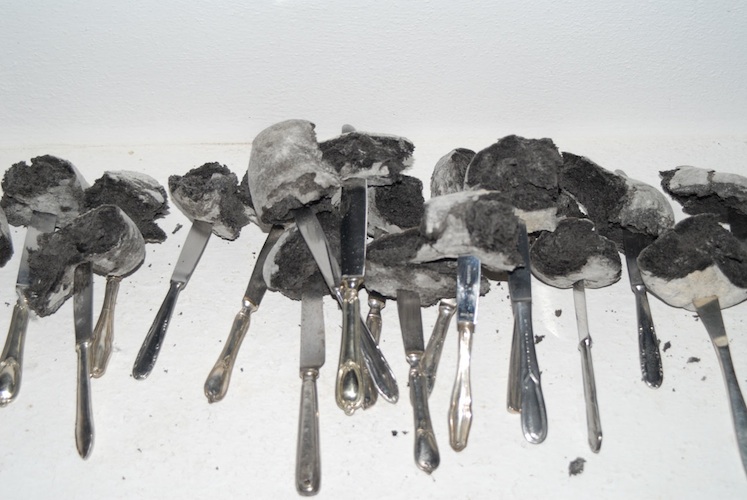