Milovan Farronato: A multitude of diaries, and just as many pamphlets with photographs glued onto them, newspaper cuttings, collages with pieces of fabric and drawings. ‘Doodles’… All lovingly preserved in your studio: inside an old trunk or piled one on top of the other or stacked on rickety shelves… I imagine it to be a densely visceral material that you are incessantly producing and filing away. A hypertrophy with or without an overall vision? With or without an aim? I must confess that I like to picture it as a headless world born out of a tireless, never-ending and unstoppable impetus and yet without a purpose.

Sissi: The things, the bits and pieces, the photos, notes and diaries that I squirrel away are for me ‘castaway bodies’ that are looking for their other parts in order to be put back together by my hands. Sensing and Feeling collecting for the sake of creating a collection, which over time takes on substance and meaning, and in which everything that I accumulate is catalogued taxonomically as a daily practice. A poetic order that constructs my identity like the articulatory set of bones that supports me from within. 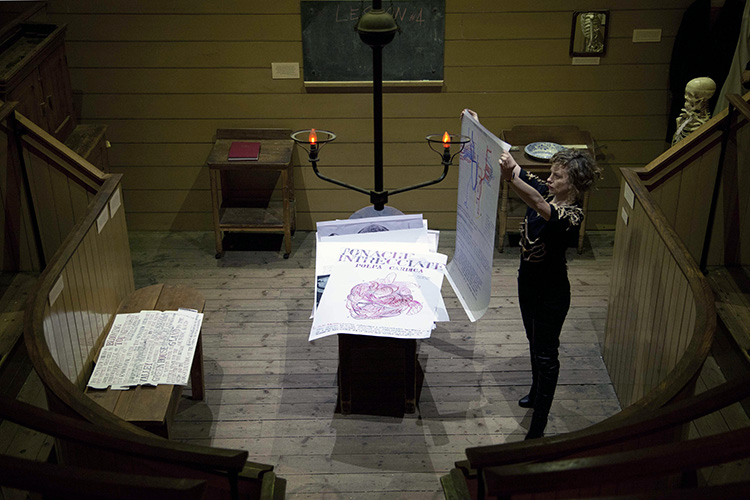 MF: And on the subject of bones, one of the first books you created was entitled Anatomia Parallela [Parallel Anatomy], your thesis at the Accademia di Belle Arti in Bologna where you were enrolled at the precocious age of sixteen and from which you graduated in 1999. A volume you have returned to various times, and of which you have recently rewritten several copies, each of them in your own hand, each of them authentic, similar and always different since the hand improves in the imitation of itself… And now too your lesson starts out from this mass of debris and efflorescence.

S: I’m a researcher. The body is my starting-point for reinterpreting reality through its filter. My method draws on a young science, born in the middle of the 19th century, whose mechanisms of understanding were connected with an idea of wonder. A way of seeing and feeling through continual associations and experiments. Purpose: a journey in the dark. Parallel Anatomy is an encyclopaedia of the body, an Emotional Manifesto that describes how the outside penetrates the body and dresses it from the inside. Each book deals with a different subject. The first volume I’ll have the pleasure to present at the Old Operating Theatre is devoted to the hollow organs, the ‘houses of emotion’. The books are handmade and in some cases reproduced to make more than one copy. My intention is to give substance to my poetic-scientific research by leafing through the pages of the volume as if it were a body that is sloughing off its skin. For a year now I’ve been carrying out a project called ‘Emotional Manifesto’ composed of a series of five performances, a tour on which I am taking Parallel Anatomy to old anatomical theatres to voice and reveal the performance of the interior. So far I’ve taken it to the theatre in the Museo di Antropologia Criminale Lombroso in Turin, the Archiginnasio in Bologna and the Teatro Anatomico in the Palazzo del Bo in Padua. This is the first and only time it will be staged abroad before the final performance, in all likelihood at 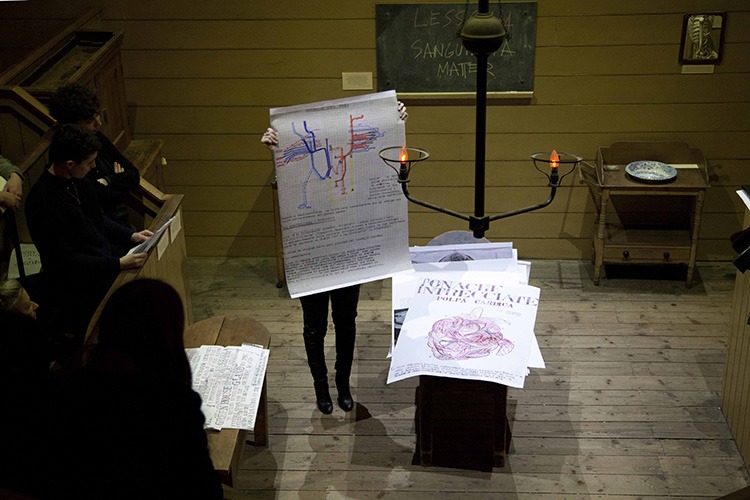 MF: For years (perhaps forever) you have been making the clothes that you live in as if they were a second skin. What will you be wearing for this occasion?

S: For each lesson of Parallel Anatomy I wear clothing that holds a dialogue with the history of the place, as if I were being dressed by the space.

In my previous performances the theatres had mostly been utilized in the past for dissections and research, whereas the Old Operating Theatre was used for the amputation of limbs and bones.

So for this occasion I’ll be wearing a jacket decorated with pieces of driftwood chosen for their resemblance to bone structures. I want to describe a set of ribs: an Exoskeletal one.

They are called Esoscheletrici [Exoskeletal]: hard on the surface with a socket for attachment.

Since 1995 I have been keeping an archive of everything I produce and wear, cataloguing the clothes into twenty families, such as ‘The Mordant: Contrasts of needs’, ‘Pompous: Sustained relief for concrete shapes on display’, ‘Saccular: Variable content’ or ‘Pruned: Resolute cuts but suggesting grafting’. And so on. Archivio Addosso [Worn Archive] is a semiotics of clothing, a personal grammar with which to construct a language through the skin that changes. 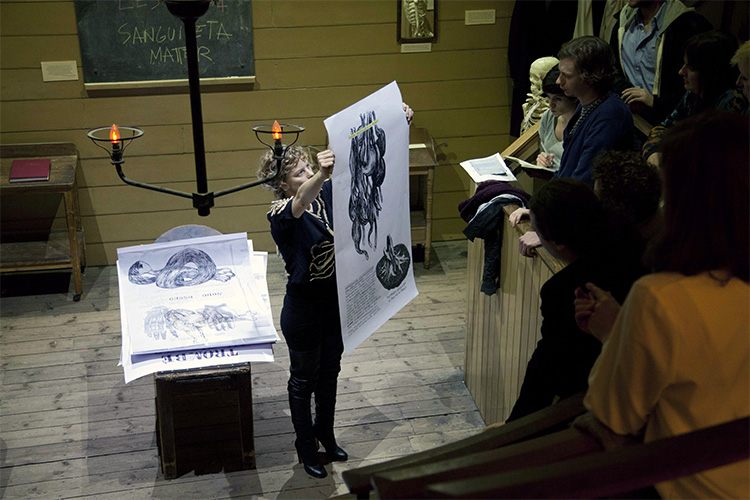 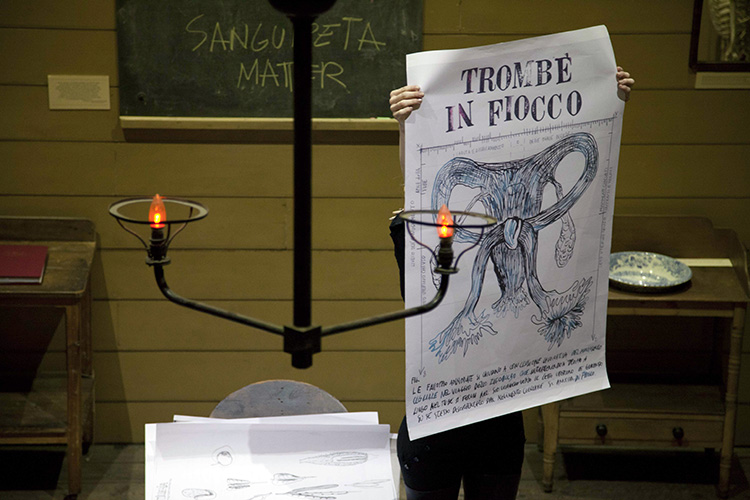 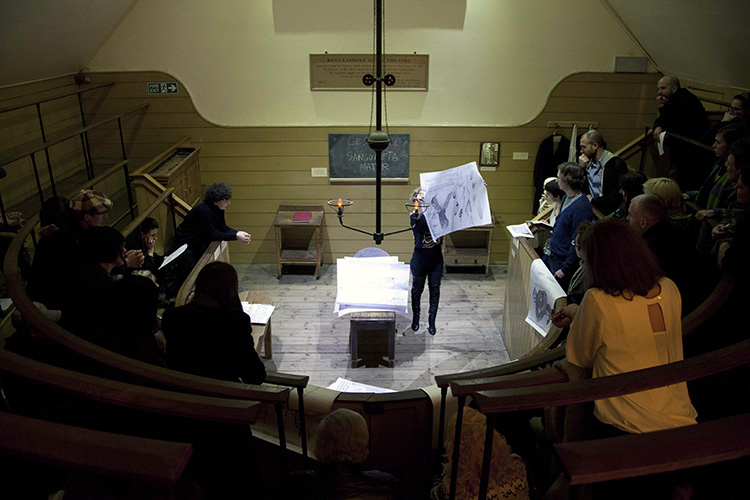 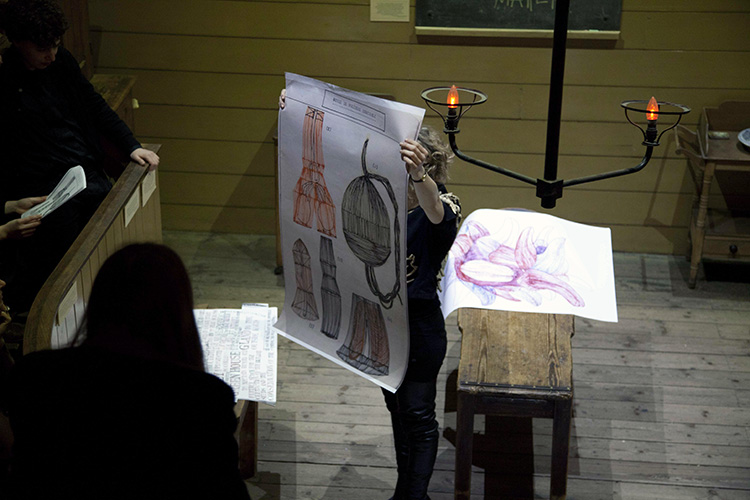 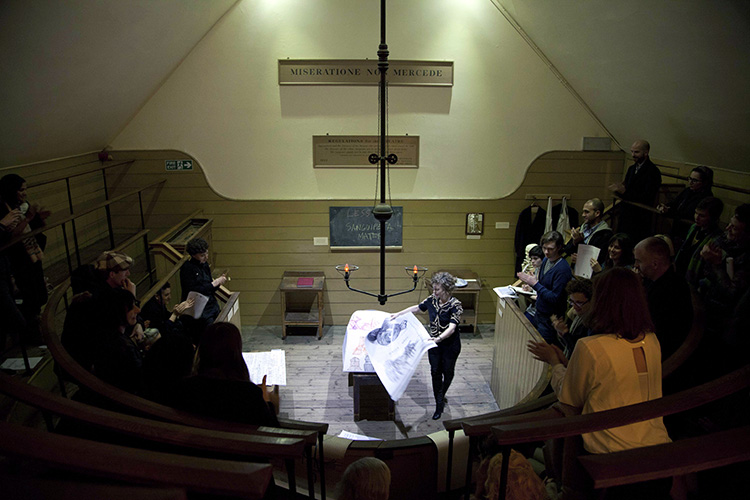 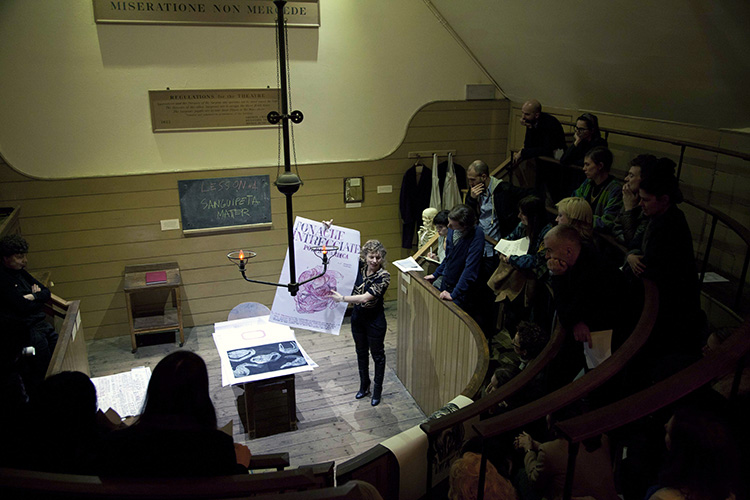 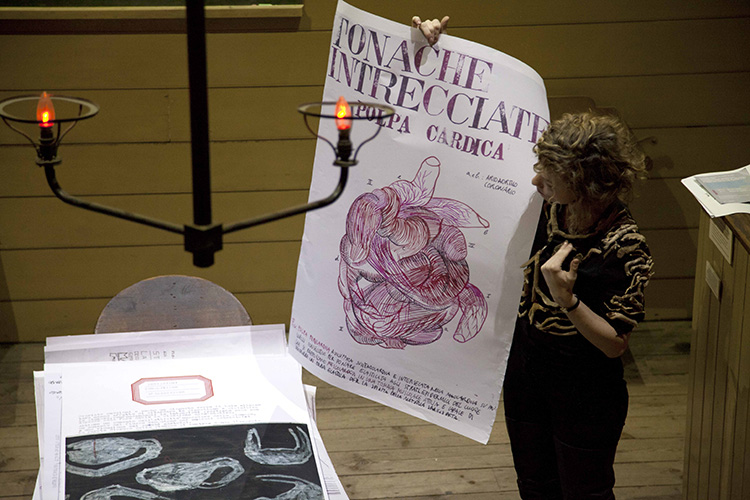 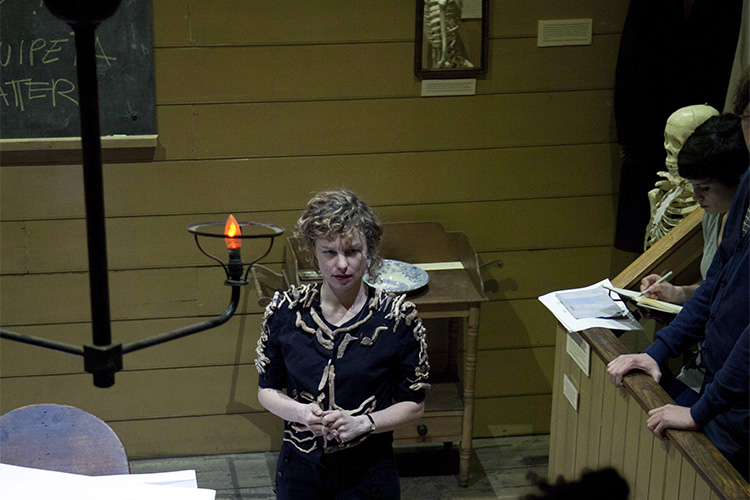 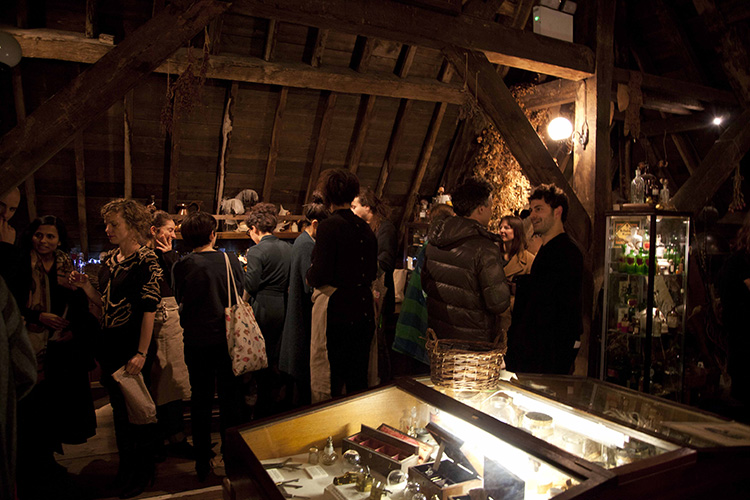 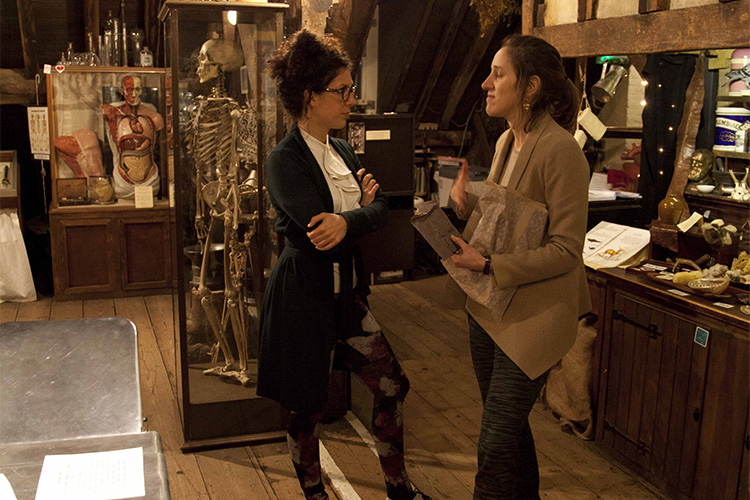 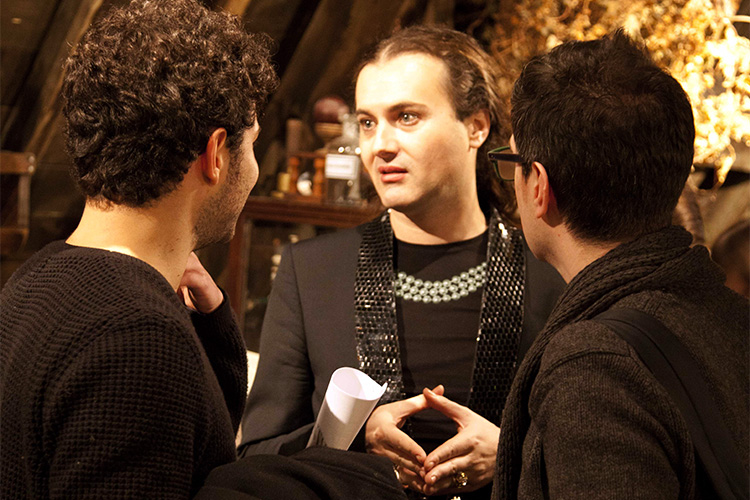 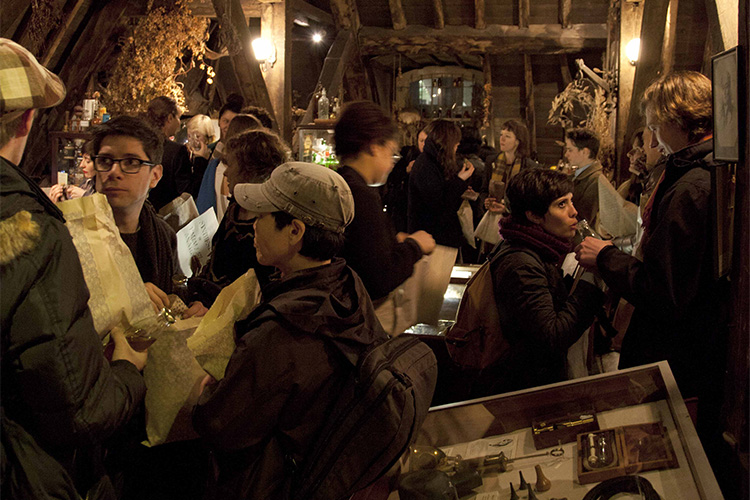 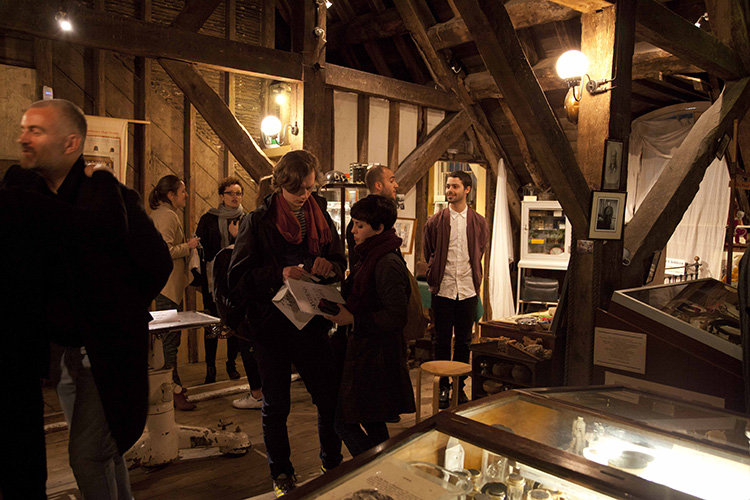 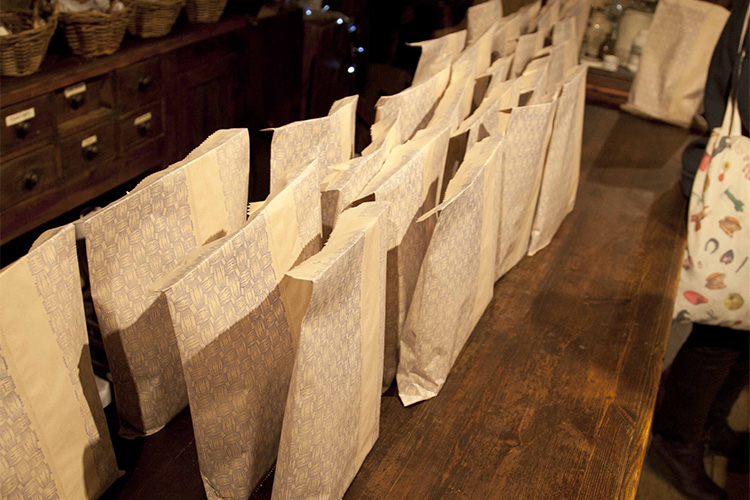 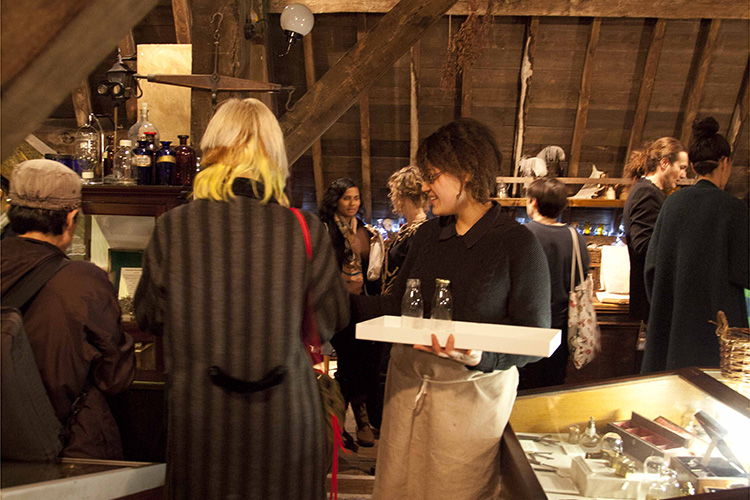 Photos and video by Jon Lowe.