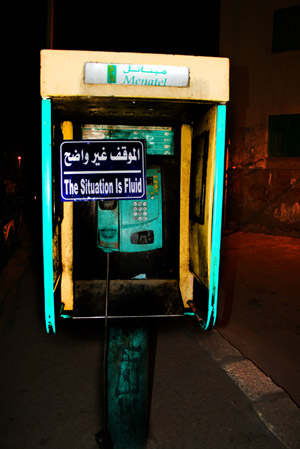 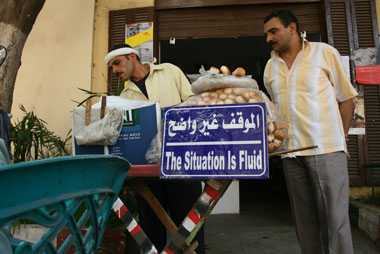 In May 2011, Bidoun Magazine approached me and asked me to produce a bilingual street sign, the sort that is commonly seen on any street in Cairo. The sign was to be similar to one produced by artist Mona Hatoum during a 2006 residency at the Townhouse, which featured the phrase “Waiting is forbidden” in Arabic and English. The sign I was to produce, however, would declare “The Situation is Fluid,” a phrase taken from a statement made by the White House regarding the situation in Egypt shortly after the January 25 Revolution had broken out. The phrase was ridiculed by Egyptian bloggers and activists as a sign of the weak and problematic nature of U.S. foreign policy in the Middle East.

I began to take photographs of the sign in different places around the city. Although Bidoun eventually chose not to use the project, I felt that there was real potential in this initial concept. In my work, I have always been interested in responding directly to the realities of the city streets, and creating a very site-specific response that non-art-going audiences can engage with. I felt that this series of photographs of the street sign in Cairo had very real, emotionally-laden stakes for the city’s residents, whether they be artists or laborers. When I discussed the project with people around town, I found that they all responded to it very strongly, bringing up different issues such as the political and economic relationship between the U.S. and Egypt, or the disappointing, empty language of the politicians in the aftermath of the Revolution. 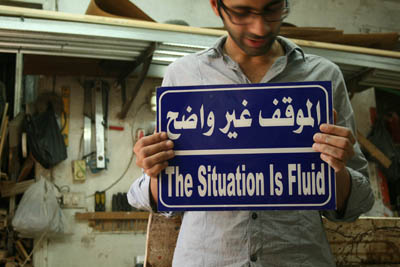 In addition to these political debates that came up in our conversations, formally, I was interested in the way these photographs highlighted more general issues regarding the individual’s experience of navigating through the urban landscape, and how precarious that navigation can be. The sign sharply brought into focus how very changeable the social and geographic fabric of a city can be in times of political change. I became curious as to what sorts of formal and conceptual resonances the sign might have in other cities around the world, especially if the viewers there were unable to read the Arabic script. 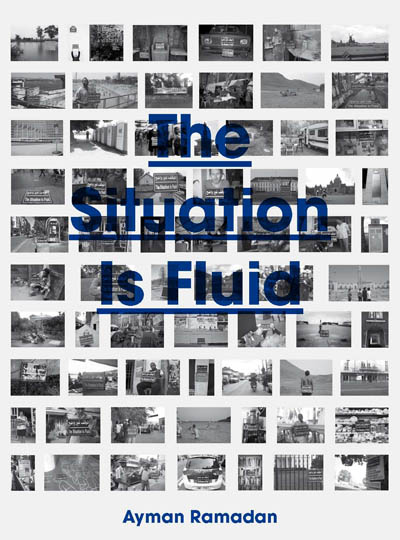 To find out, I began producing more signs and sending them to friends in other cities, who then passed the signs on to other friends, and so forth. Each person took a photograph of the sign in the location of their choosing and send the digital image back to me, along with a brief description. I decided to compile all of the photographs together in one publication. Much of my past work has been performance or installation-based, requiring the viewer to be present in the space to experience it. But for this project, I was interested in the format of the digital photograph and the medium of the publication as something that was easy to reproduce and circulate, just like the sign itself.

In its final form, the project began to function on different, but closely interrelated levels. On a theoretical level, the images ask the viewer to carefully consider the processes of perception, reading and translation. And on a more social or political level, I hope that the images also encourage a heightened awareness of the very fragile nature of symbols of authority and systems of power.

In its basic aesthetic form, the simple street sign is recognizable almost anywhere in the world. It is easy to trust it and believe that it represents an official truth. But in many of these photographs, my particular street sign is effectively meaningless. The viewer has to puzzle over it and make his or her own connections to try to make sense of it in that particular context. Similarly, seeing all of the images together collected in one volume, we are tempted to try to make connections between the pictures, and understand them as telling one overarching narrative. But this attempt to make sense and meaning is, in the end, just as arbitrary as the meanings that are imposed upon us by political authorities with words and symbols every day. I hope that, with this project, the viewer can take away an empowering sense of his or her own ability to construct their own truths and meaning, without passively accepting what is given to them. 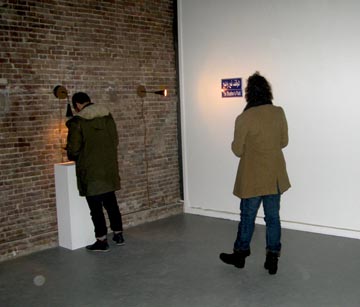 As part of the collaboration with the Rijksakademie, Fiorucci Art Trust also selects residents to participate in its program of events and exhibitions ‘Volcano Extravaganza’ in Stromboli.