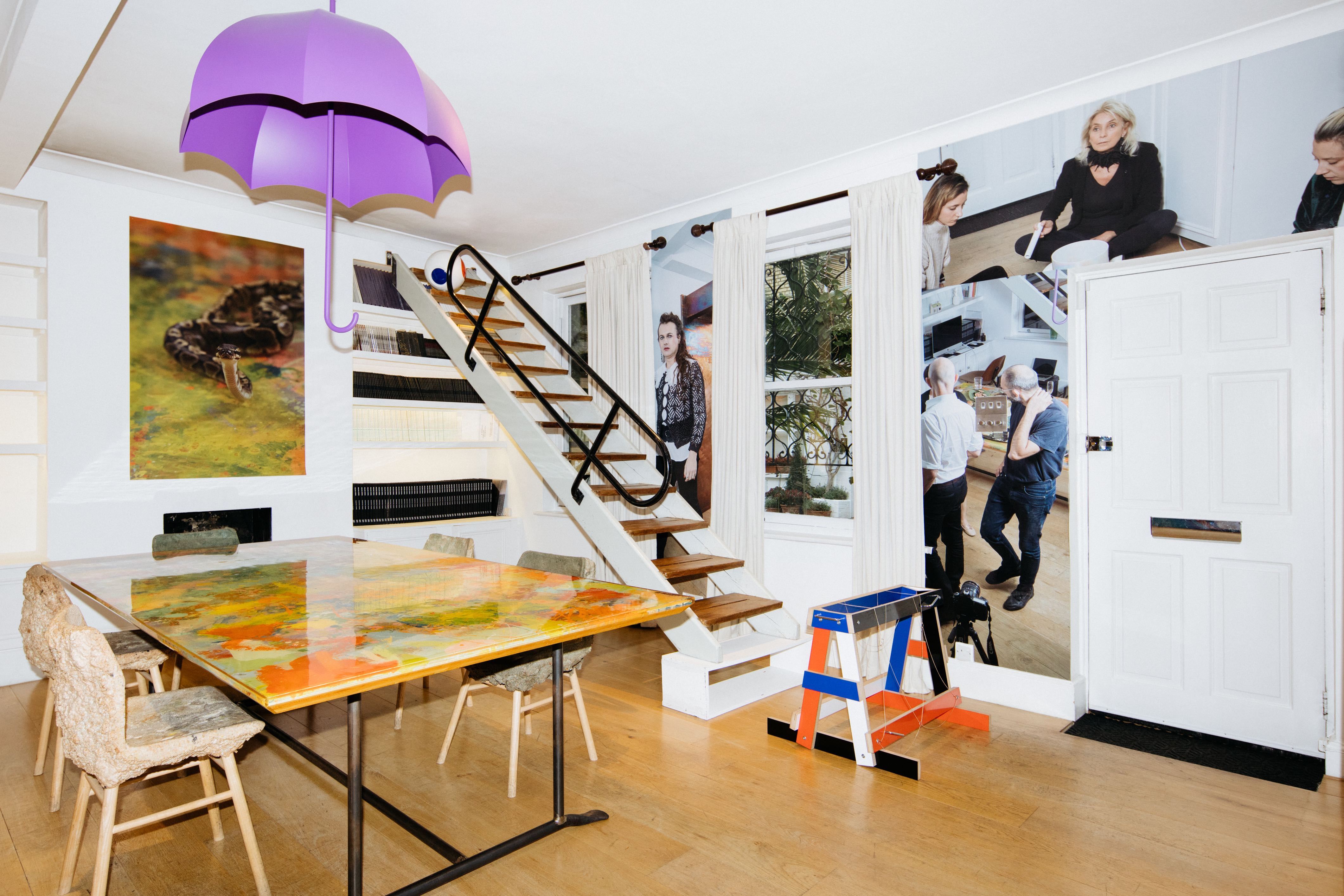 Toxungenous Activities: the act of delivering poison into the body through the skin.

A positive contamination and intertwining of both public and intimate energies was initiated as the artist conceived a convivial day where guests simultaneously became models and tools to activate the space. These included, among others, longtime friends and fellow artists like Eddie Peake and Patrizio di Massimo, or Prem Sahib who cooked a beautiful, versatile lunch decorated with edible fresh pansies—a reward won by Nicoletta Fiorucci for her support to the ICA, where the artist had his first institutional solo show in 2015—as well as new entries, such as Benjamin Whitley, who graciously documented the day. 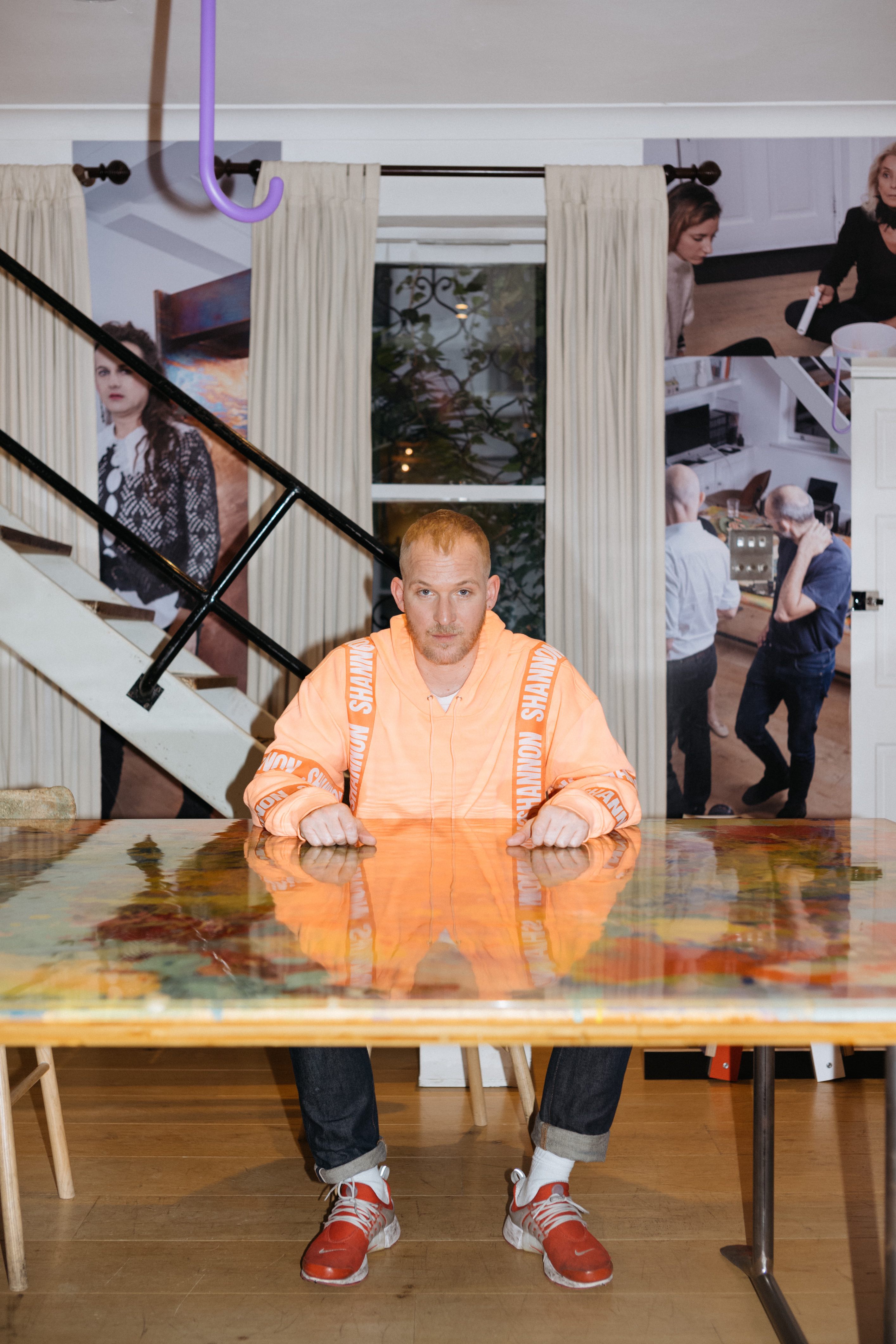 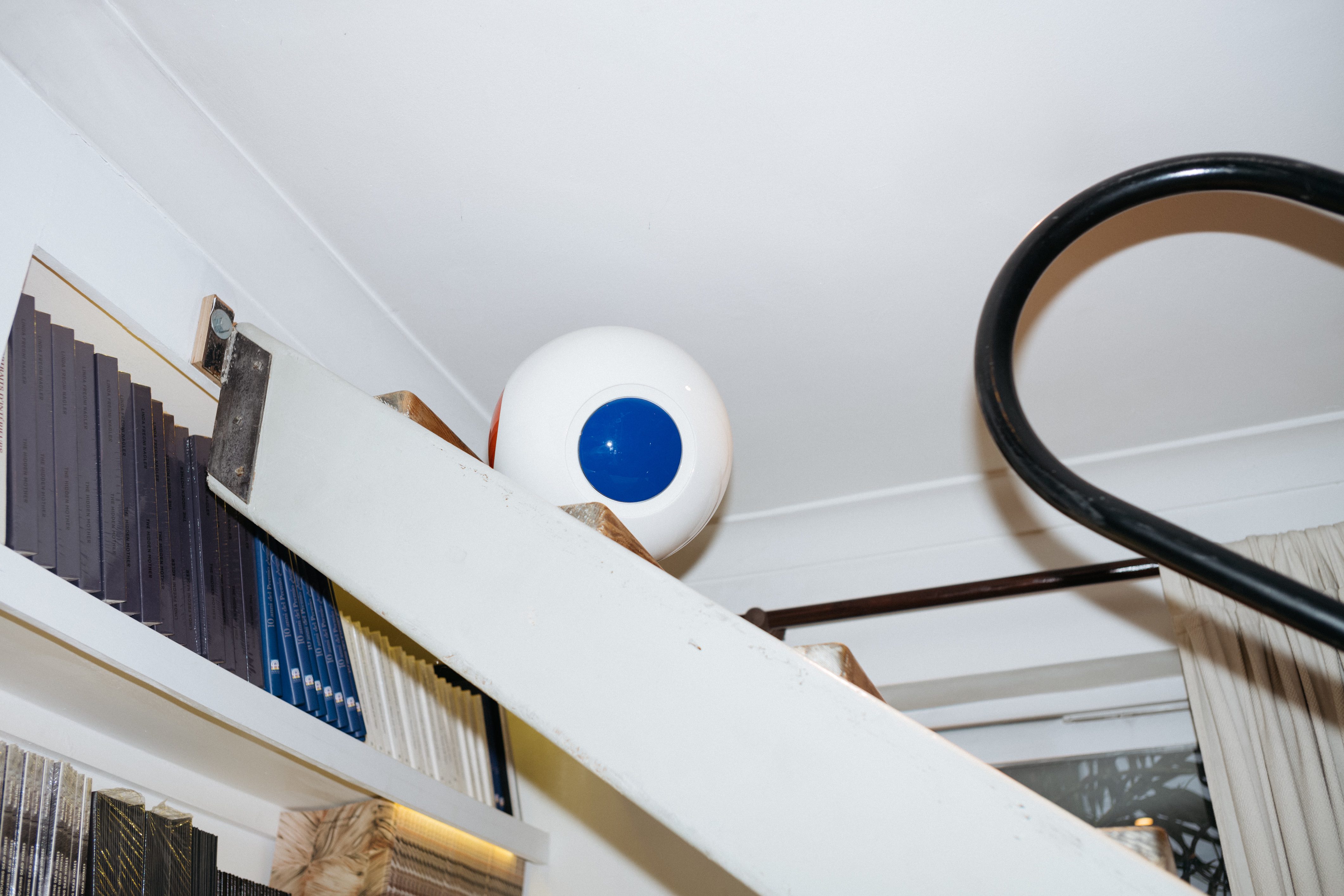 The activity of generating imagery, moving equipment, staging the shots, selecting and reviewing, became the so-called fil rouge for the mise-en-scène of a totalising environment, a complete, endogenous situation to which everyone participated, and contributed on some level, following the nature of their instincts. In his quest to generate a new skin for the Trust, Longly transported a series of works from his studio, which served alternatively as characters and supports. A few of them eventually left again, making space for a new series of prints and wallpapers by the artist: the site-specific outcome of our Toxungenous Activities commission. 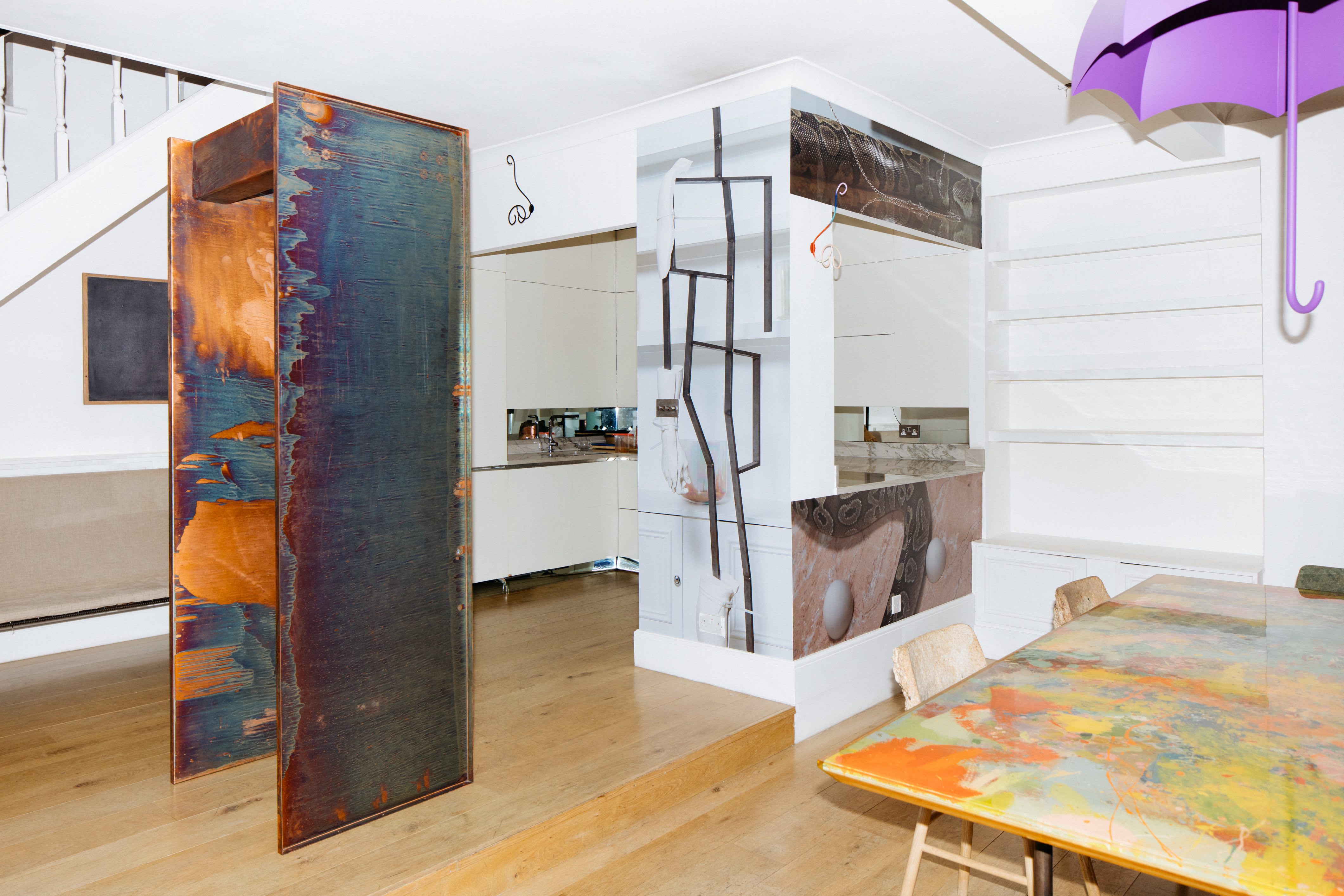 The previous display of the Trust’s office was mainly removed, but for some main characters which stayed: the Franz West table at which we sit everyday, where we work and write and think and discuss; the staircase by Le Corbusier, leading the path to nowhere, as well as the gravitational miracle which is the daring (and certainly not superstitious) Umbrella by Katharina Fritsch, levitating above our heads. Not to mention yet another improbable persona: A.O.: A 1-3, the semi-geometric puppet by Thomas Zipp.

During the shoot, whereas usually uncontested in their peculiarity, these daily protagonists of the Fiorucci Art Trust had to enter a dialogue with George Henry Longly and his multitude of artworks. In turn, Longly had to almost make a curatorial choice, in order to achieve an outcome in line with both the site and its objects-specificity, and his own aesthetics. 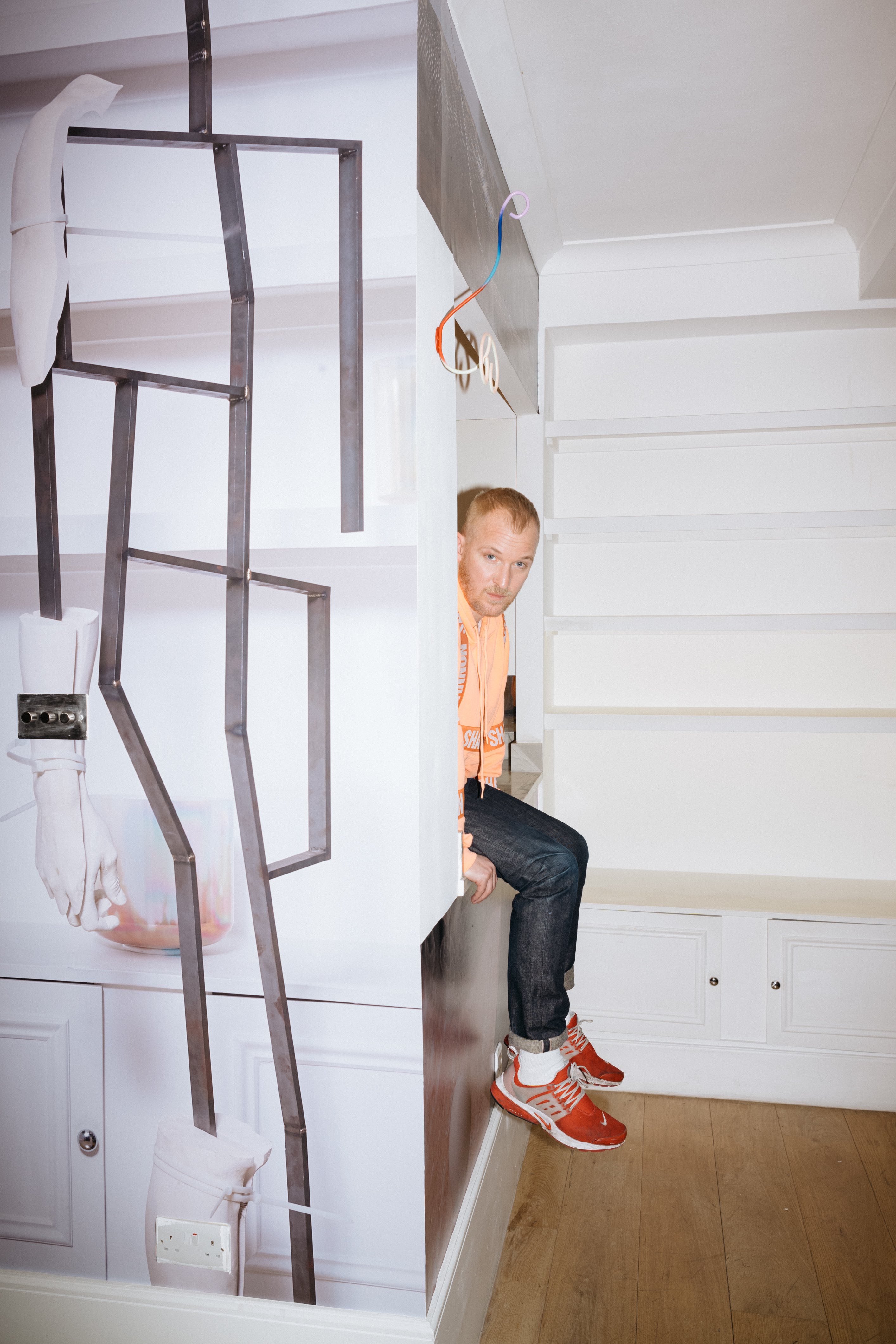 George Henry Longly was rather mesmerised by the powerful explosion of dripping colour and memories that is our alchemic Franz West table, also wrapped in a perspex skin of its own. This instantaneously became the centre stage, whereas Un Escalier turned into a more director-like, scrutinising presence. As majestic as a totem and contemporarily, playfully curious, the twelve steps were indeed endowed with the gift of sight throughout the presence of The Liberator: a sculpture by the artist reminiscent of an all-seeing eye. 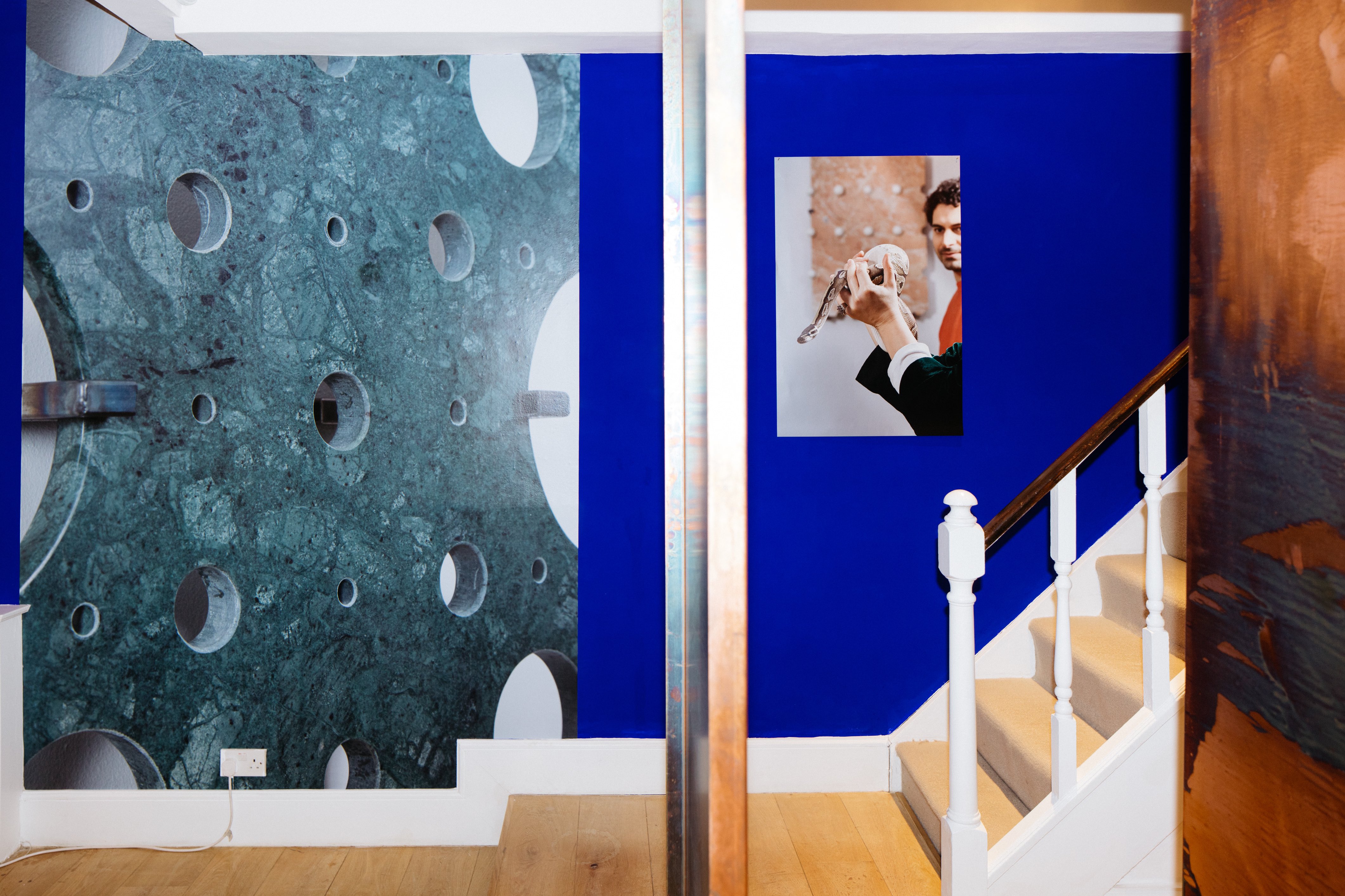 In order to answer such an ontological riddle Longly invited all participants to swipe back and forth through a life-sized metal detector made of copper plated steel. Living in a perpetual state of transformation, the work has been oxidising since its inception, suggesting aggregations of manifold imagery—particles of fantastic clouds and traces of the mind, possibly even the reminiscence of the energies of those who dared to cross it. An alchemical object carrying the memories of parts of the being which are yet to be understood…

A quiet yet colourful presence nearby it, John, the trestle, let our guests play with its dangling necklaces along its blue, black, white and red limbs. Some others were engaged in the attempt of hanging their belongings to the sinuously placed, sensuous editions of Projecteur, a series of hooks dispersed at unreachable heights, which might have evoked some sudden fantasy. 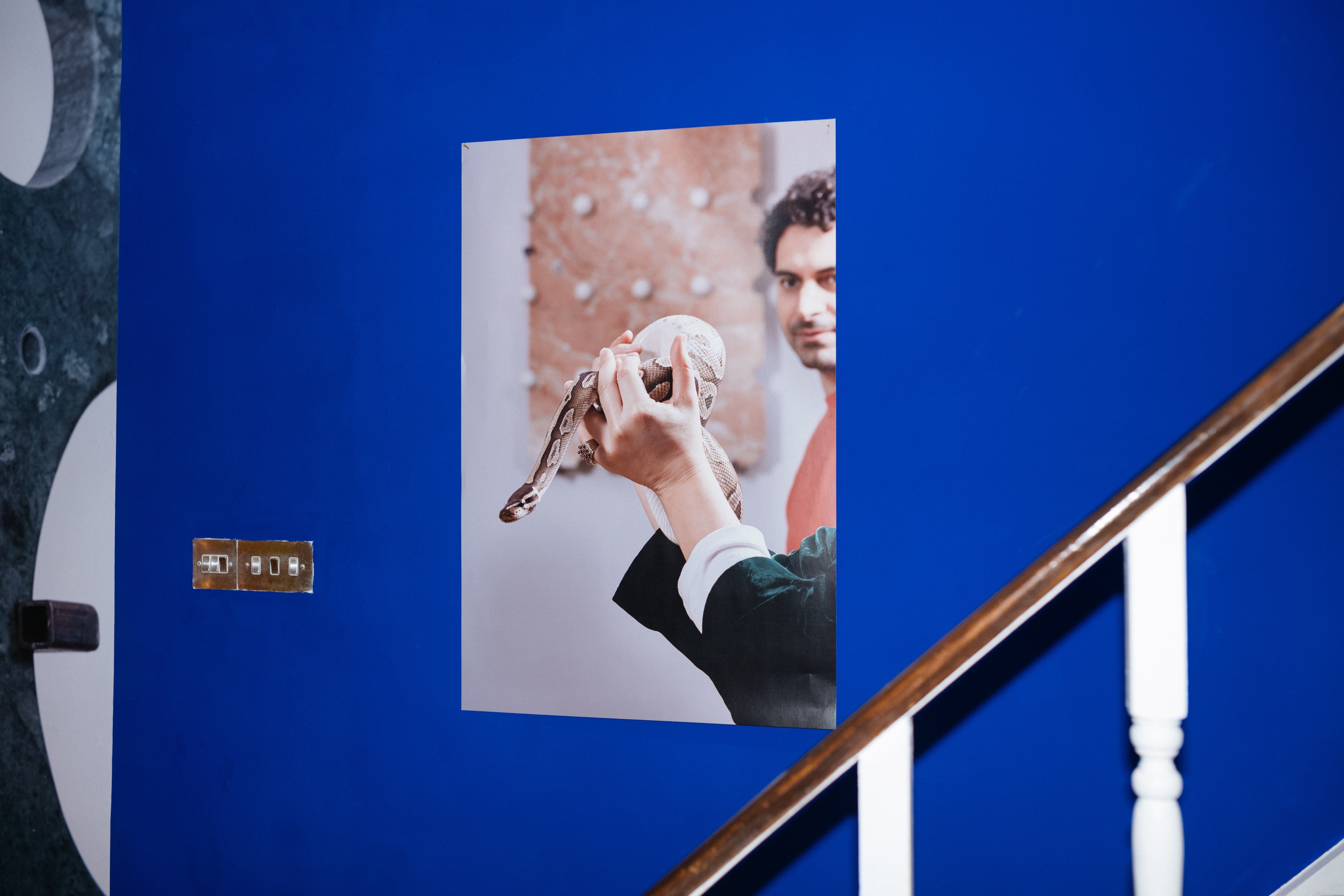 After lunch, we were introduced to the three royal pythons Carol, Debbie and Ben by their wrangler, Chris Miller who was also the model for George Henry Longly’s sculpture Doryphorous. The triplet of snakes—undoubtedly, the stars of the afternoon—also enjoyed a ride in and out of Promo III: a green marble sculpture filled with perfect holes of various radii.

While some participants enthusiastically engaged with our new, non-venomous friends, others preferred a quiet chat in company of a glass of water, ice and lemon under the shadow of She, one of the artist’s sculptures which holds within it dozens of bottles of sparkling water. Artworks kept being moved, in a choreography of emblematic presences. The Trust’s Founder Nicoletta Fiorucci played the alchemic quartz singing bowls for the royal pythons and playfully wore them around her neck and wrists. Also artist Celia Hempton and curator Nicoletta Lambertucci enjoyed exploring these new peculiar ornaments. Finally, just before being put to bed, the reptiles enacted a tableau vivant, slivering up and down a pink, water-jet cut marble sculpture symmetrically filled with duck eggs, eloquently titled The Iconoclast. 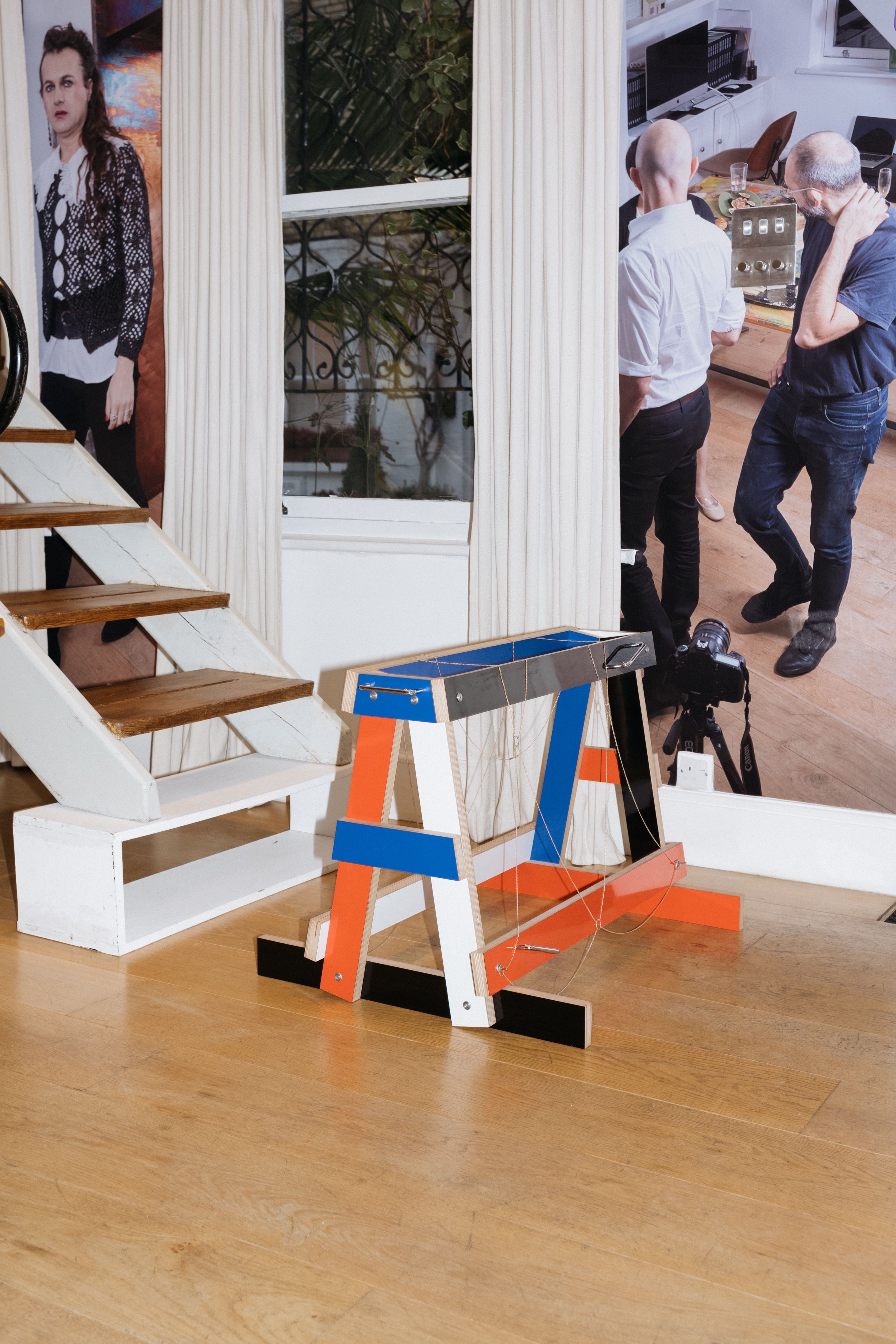 A characterising aspect of the Fiorucci Art Trust is that each experience becomes a site-specific, collective journey aimed at expanding the research of contemporary artists, in both conventional and unconventional ways. A convivial moment in time where participants share an experience, working, living and exploring together. This time, George Henry Longly has interpreted our spaces as a site for production, taking inspiration from our daily operations, which widely consist in the making of events. In its own style, by producing a situation that was not specular but rather reflective of how the Trust operates on its daily basis, Longly enacted a mise en abyme of layers upon layers of suggestions, and imagery, shedding our old skin to wear a new one.