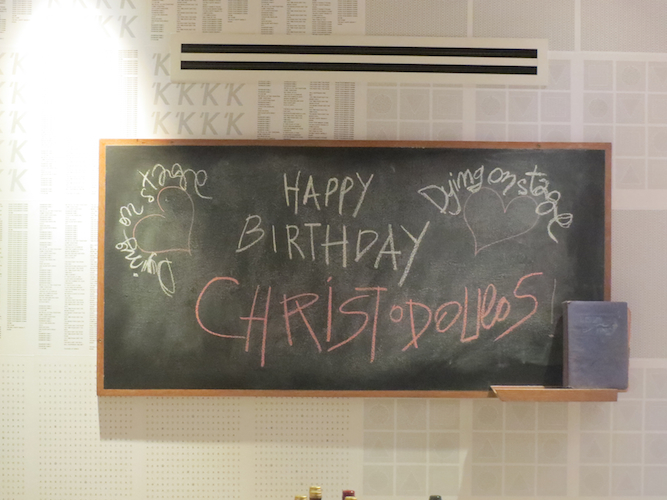 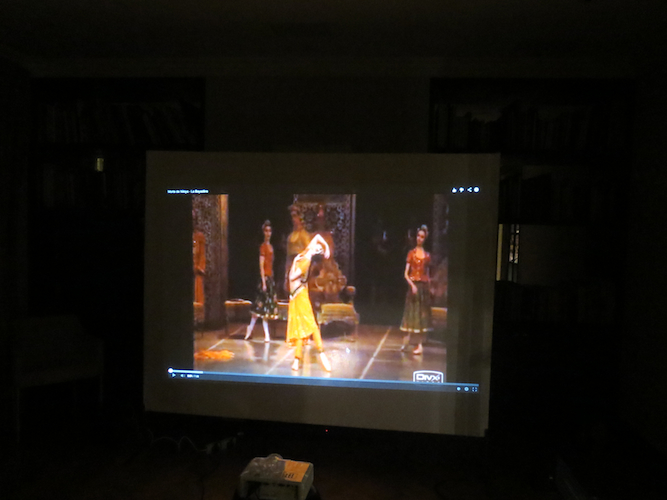 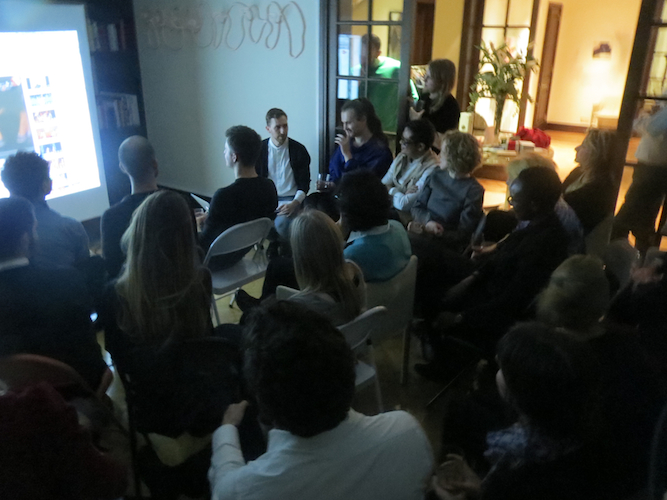 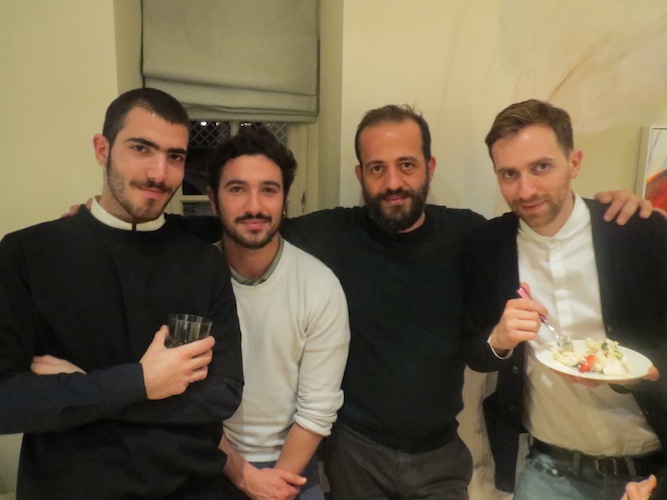 I’m told delving into history, into archives is essential to Christodoulos’s work. That it’s his birthday, that I’m invited to an evening of celebrations. A dinner was planned at the Fiorucci Art Trust HQ, where Christodoulos is currently artist in residence. Could I make it? We would be eating a menu conceived by Christodoulos and Chef Lucas Dominguez of edible flowers including courgette flowers, artichokes, broccoli, capers. Could I make it? Yes, I could. And could I write a short text about the evening? I didn’t know if I could, but yes, I would.

The invitation that followed was inspired by the ballet Giselle, the classic tale of betrayal, supernatural spirits and love that transcends death. Christodoulos will present a series of Youtube videos, “Dying on Stage” it announced. There’s nothing more modern than watching Youtube videos en masse.

When I arrived, the house was buzzing with people. I was introduced to Christodoulos and presented him with my tiny present, a popular London zine. I asked him if he knew the publication, he didn’t. You’re in for a treat, I told him. As more guests arrived, I made my way to the kitchen. Jona Lewie’s song “You’ll Always Find me in the Kitchen At Parties” came to mind [https://www.youtube.com/watch?v=62eTq8ErUOQ&feature=kp]. I mingled with an inviting group of people I had never met. We spoke of Los Angeles, Stone Henge, film collectives, nature and lies in Triple Canopy’s International Art English. When I started discussing the highs and lows of freelance work as a storyteller in a new city, one from the group, a blonde with glasses, cut me off urging me not to get a job. Why couldn’t there be more people like her in the world?

One of the great things about life is that we must regularly stop whatever it is we are doing, saying and thinking and devote our attention to eating. Food in this house was taken very seriously, which led to pure pleasure bite after bite…

Inevitably, after dinner, cigarettes were shared in the back patio. Some of us pretended that we didn’t really smoke anymore. Others felt no shame. We all agreed that the patio’s summery colors were deceiving on this cold winter night. The youtube lecture will start shortly said the girl with the curly hair. We quickly finished our cigarettes, and made our way back inside, where it was warm.

Christodoulos’s meditation on Death on Stage began with a clip from the ballet La Bayadere. Nikiya performs a somber dance. She is then given a basket of flowers which she believes are from her love Solor, at which point she commences a frenzied and joyous dance. Concealed beneath the flowers hides a venomous serpent which bites her on the neck. The High Brahmin offers Nikiya an antidote to the poison, but she chooses death rather than life. But Why? someone asked. The entire room cracked up. She would rather die than live without her beloved Solor, Christodoulos explained. Christodoulos was clearly very romantic, and the string of videos that followed only confirmed this feeling: Big Bird singing It’s not easy being green at Jim Henson’s Memorial, Dalida performing Je suis malade, Anna Pavlova dancing The Dying Swan, Sarah Bernhardt’s filmed funeral procession from 1923. We diverted from Youtube for a minute to see a photograph of Bernhardt, taken by Felix Nadar, posing dead in a coffin while she was still in her prime. This is how she wanted to be remembered. Who wouldn’t?

This next video is about intellectual murder, Christodoulos said before playing a 1993 interview with Paglia where she acts like a sputtering, defensive fool when confronted with video evidence that her formal idol, Susan Sontag, had never heard of her. I’m the Sontag of the 1990s—there’s no doubt about it, Paglia hissed as we all cringed. The video of the Dior dancers and their wild acrobatics – near death experiences on stage according to our lecturer – lightened the mood and even inspired some from the group to suggest we try it. Now that we all knew how Christodoulos and Milovan spent most of their nights at the Fiorucci HQ, it was time for life, for cake. Maybe even some adagio? I took my first bite and thought the dead are alive until we forget them.

As the guests were slowly making their way out, I noticed that some of them were carrying large rocks. I looked at Christodoulos with a question mark. The rocks were from the River Ouse, where Virgina Woolf committed suicide, he told me. On 28 March 1941, Woolf put on her overcoat, filled its pockets with stones, walked into the River Ouse near her home, and drowned herself. He had collected them on one of his recent research trips. Ha! Christodoulos’s idea of a party favor!

A small group of us remained and it was now time for Christodoulos to open his presents. He sat at the table and opened them carefully one by one. My favorite came last. It was a fortune telling fish from Taiwan. “Place fortune teller fish in the palm of the hand and its movements will indicate… Moving head… Jealously. Moving tail…Indifference. Moving head and tail…In Love. Curling Sides…Fickle. Turns over…False. Motionless…Dead One. Curls up entirely…Passionate.” The fish went from palm to palm and from what I can remember, it curled up entirely every time. Tonight fate was on our side, we were conclusively a group of very passionate people.

In the taxi on my way home, my mind was full of colors. I thought, heaven can wait. I played Alphaville’s “Forever Young” from my phone. Unlike the rest of us, it will never get old. So I played it again. 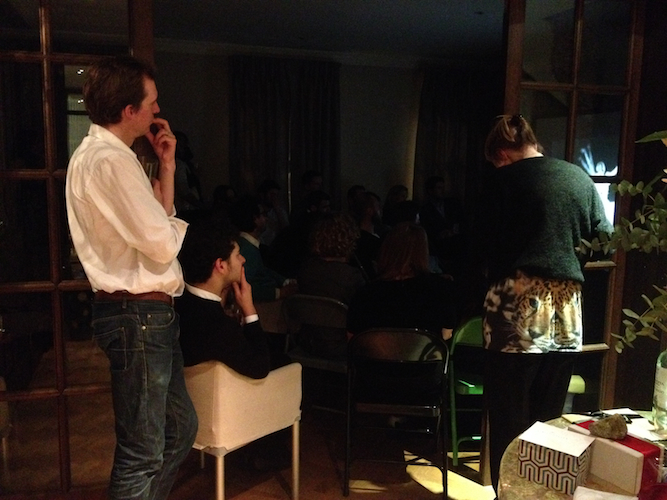 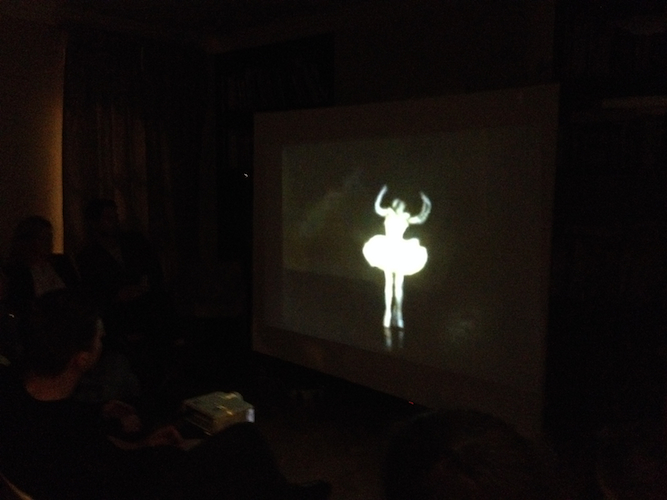 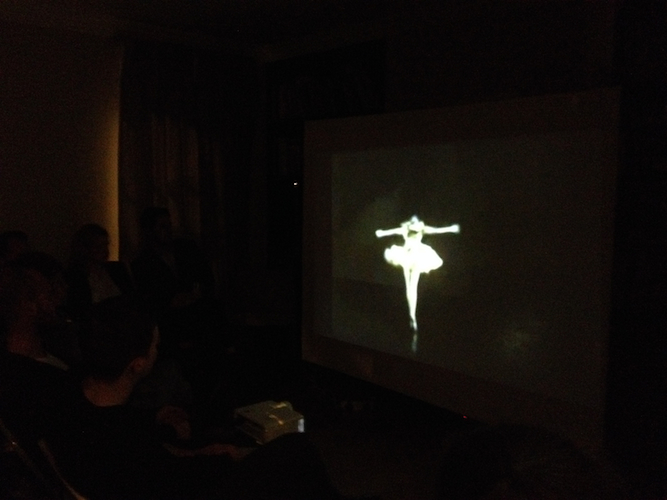 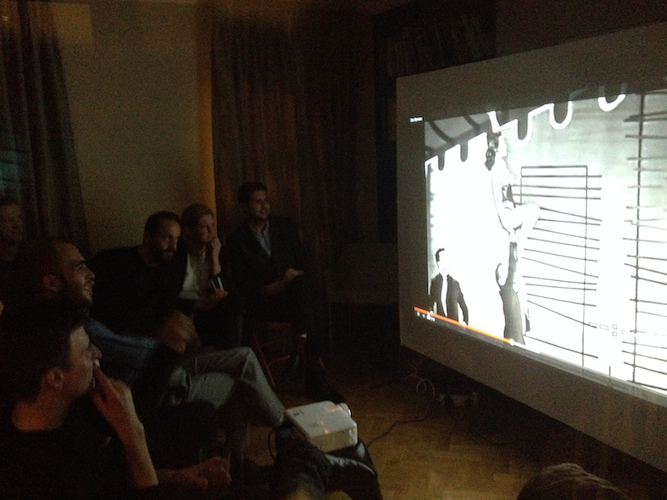 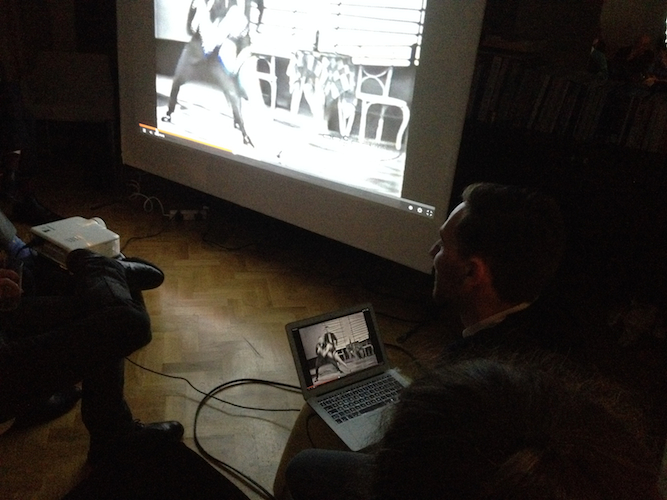 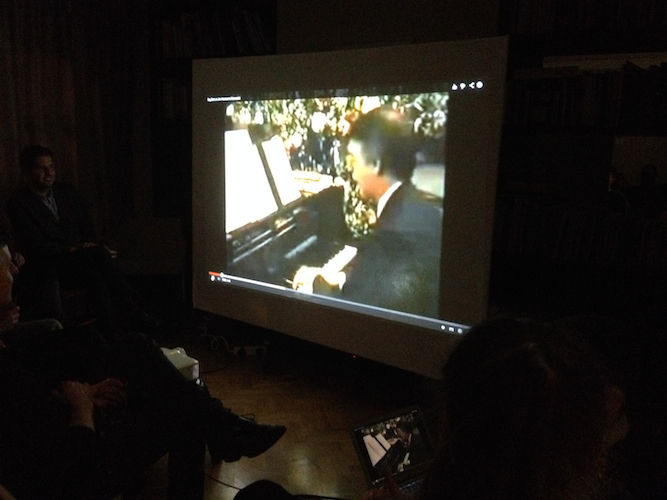 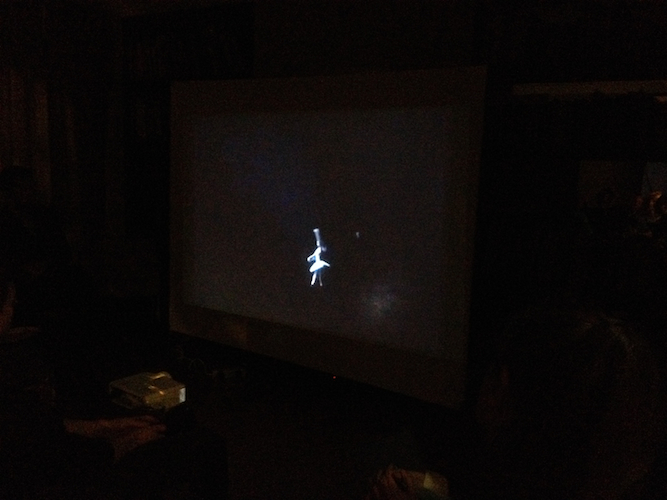 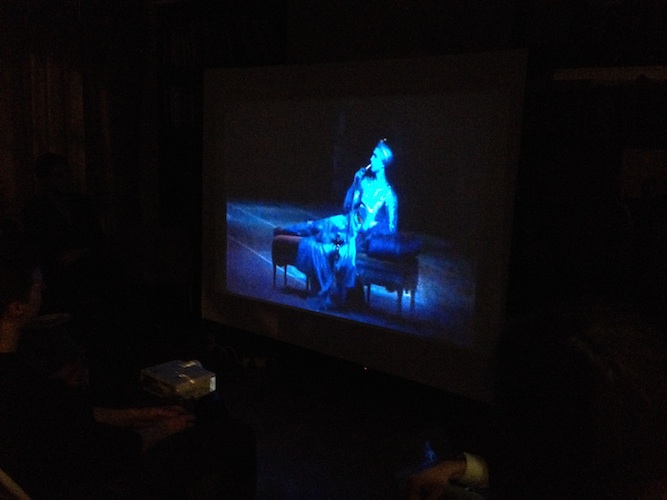 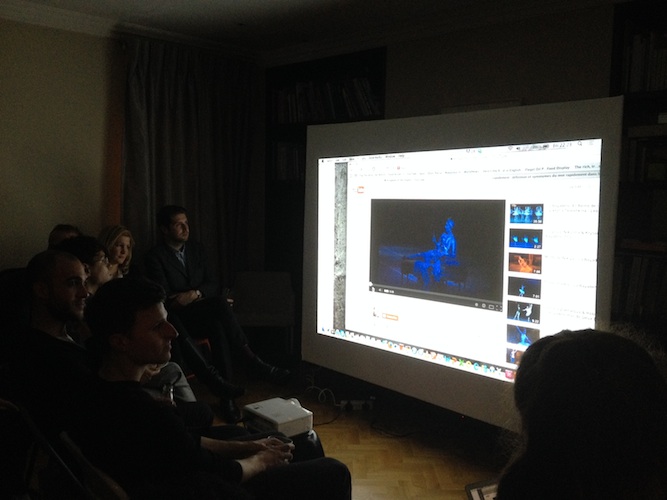 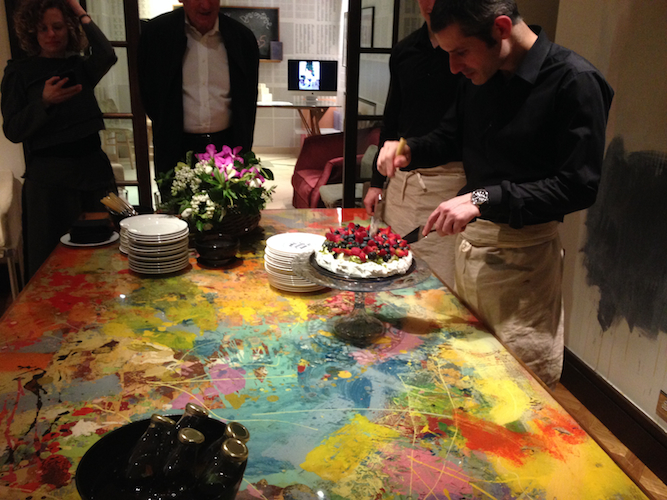 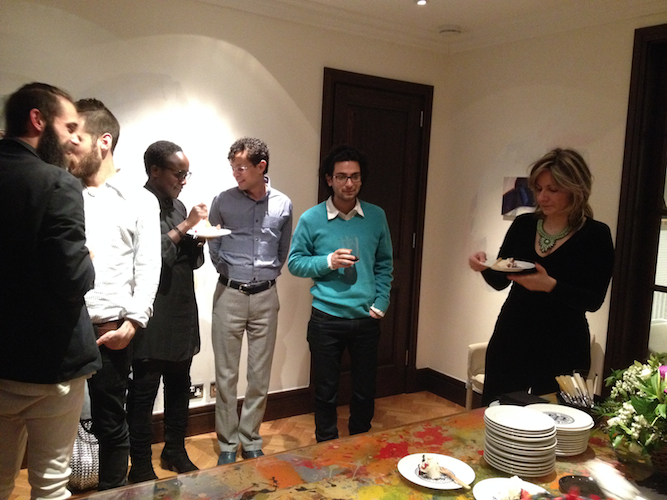 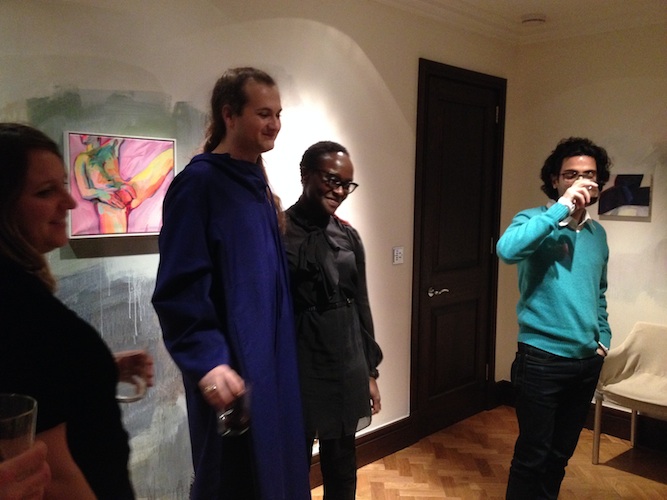 Links to the videos:

5. 1899 The fencing scene with Hamlet and Laertes

14. Onigata-the death of the gender

21. Maria Callas and the elephant